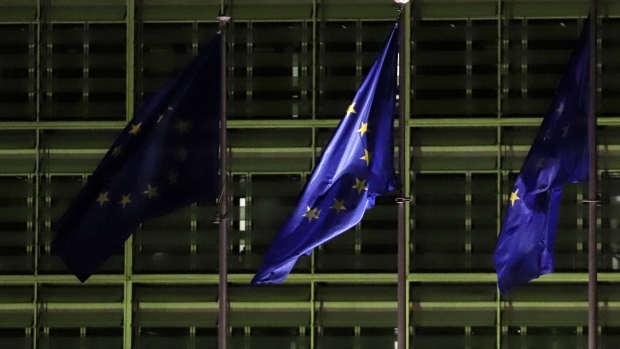 European flags flutter outside the headquarters of the European Commission on the sidelines of a European Union (EU) special meeting of the European Council to discuss the Ukrainian crisis at the EU Council headquarters in Brussels, Belgium, on Thursday, Feb. 24, 2022. Europe is bracing for what could be an exodus of more than a million refugees after Russia launched a full-scale attack on Ukraine, as officials say any initial strain will be borne by member states on the bloc's eastern frontier. Photographer: Valeria Mongelli/Bloomberg , Bloomberg

(Bloomberg) -- NN Investment Partners, an asset manager owned by Goldman Sachs Group Inc., is rejecting a bigger proportion of the green bonds pitched to it as the market for such products swells and fund managers get pickier.

“We have about a 30% rejection rate at the moment for the bonds that are of interest to us,” Isobel Edwards, a green bond analyst at NN Investment Partners in the Netherlands, said in an interview. That figure generally “goes up slightly each year,” she said, partly because the green bond market is growing but also due to the application of “higher standards as we go forward.”

It’s the latest indication that environmental, social and governance investment products now face a more discerning set of buyers than just a year ago. Part of that ties in with the wider market selloff as central banks raise borrowing costs to fight inflation. But it also coincides with greater skepticism toward the quality of some of the ESG products being sold, in part as regulators start to weigh in.

Edwards said that at NN, she and her colleagues tend to get suspicious when bond prospectuses contain excessively glowing sustainability metrics. And too many issuers are trying to overstate their credentials, she said.

“We tend to call it a greenwash when it comes to the market with everything 100% aligned and everything is the greenest it can possibly be, the sustainability plan is the best on the market,” Edwards said. NN prefers it when issuers own up to their weaknesses, “and then we can start from there. But at the moment, it’s sort of the opposite,” she said.

“There’ll be shining sustainability reports and frameworks will be given to us, and we’re like, ‘OK, well for sure this isn’t just the whole story,’” Edwards said.

When handed a prospectus that’s too good to be true, the NN team will then spend hours “trying to dig into the details,” in order to get to “the real story,” she said.

“But by that point, it’s sort of left a bit of a greenwashing taste in our mouth that we’re not quite having the dialogue that we would’ve hoped to have had,” she said.

The market for ESG debt -- currently estimated at $4 trillion -- is set to swell to $15 trillion by 2025, according to Bloomberg Intelligence. And while most of that issuance is coming from Europe, other markets are also growing rapidly. BI estimates that green loans may make up 55% of China’s total lending by 2032.

Meanwhile, stricter rules in Europe are raising serious questions as to what will qualify as a green bond in the future. Green bonds and loans account for more than 56% of the total sustainable debt market, but many of these could lose their current environmental credentials under the EU Taxonomy’s strict standards for green debt, BloombergNEF’s Maia Godemer wrote in a note published June 23.

“Even those that meet the criteria today could see their fortunes change as the European Commission will re-assess the criteria every three years,” she said. “Revisions could reshape the market’s expansion in Europe and beyond.”

Edwards said there are concerns that some of the regulatory developments under way might ultimately put issuers off even trying to construct a green bond. It’s a concern that’s also been voiced by bankers, for whom ESG debt underwriting has become a growing source of income.

But with voluntary frameworks like ICMA, the market has the setup it needs to discipline bad actors, Edwards said.

“The problem with regulation is that whenever the new pieces of regulation come to the market, it also implies fines and legal liabilities,” she said. “If we get to the point where nobody wants to take the risk to issue a green bond, that’s not quite what we want to do.”