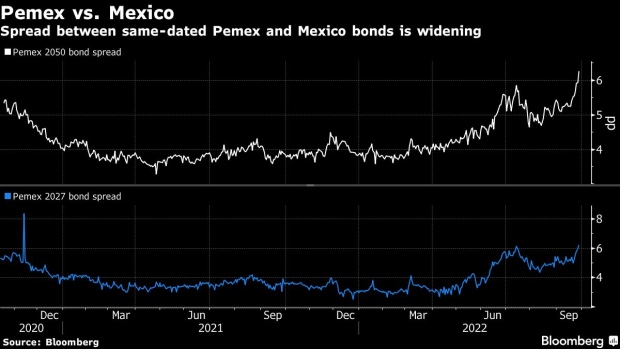 A worker holds tips received in both US Dollars and Mexican pesos at a Petroleos Mexicanos (PEMEX) gas station in Ciudad Juarez, Chihuahua state, Mexico on Thursday, July 21, 2022. As nations across the globe scramble for energy in the face of a pandemic supply crisis, extreme weather and the Russian war on Ukraine, Mexico -- at least, right now -- is sitting pretty. , Bloomberg

(Bloomberg) -- Petroleos Mexicanos is seeking financing from HSBC and Goldman Sachs Group Inc. in a deal that will tie funds to reducing greenhouse gas emissions.

The banks have reached a preliminary agreement to provide financing to Pemex linked to carbon emissions reduction goals as the Mexican state producer struggles under a liquidity crunch and faces increasing pressure from investors to improve its environmental track record, according to people with knowledge of the situation. The banks will provide about $1 billion, one of the people said.

The deal has yet to be finalized, the people said. Pemex and Goldman Sachs did not respond to a request for comment. HSBC declined to comment.

Andres Manuel Lopez Obrador’s government has stopped paying for the company’s debt service so far this year amid the spike in crude prices. Investors demand an extra 6.3 percentage points to hold Pemex dollar bonds due in 2050 over similarly dated Mexican sovereign debt.

The spread is the highest since the company issued the notes two years ago. The company is still struggling to pay suppliers after the sale of new notes from a debt swap flopped, underscoring concerns about its liquidity.

Pemex said in an earnings call in late July that it would invest $2 billion from its own resources and international credits to reduce methane emissions by 2% by 2024. Pemex’s gas flaring, which results in C02 emissions, rose 9.7% in the second quarter compared to the previous one. Last year, its scope 1 carbon emissions -- those directly generated by the company -- climbed 8% from a year earlier.

Researchers at the Polytechnic University of Valencia in Spain have discovered two enormous methane leaks -- the second biggest contributor to global warming after carbon dioxide -- from a Pemex offshore oil platform. The leaks, in December and August, each contributed about 40,000 tons of methane released into the atmosphere, making them some of the largest emissions ever detected by new satellite technology, according to Itziar Irakulis-Loitxate, the lead researcher on the studies.

Pemex downplayed the size of the December methane leak, noting in a statement that the study’s authors misinterpreted nitrogen as methane gas, and said the gases were escaping for several hours, rather than several weeks. Irakulis-Loitxate told Bloomberg in an interview Pemex’s statement “had no basis” because the satellite technology specifically detects methane and would not confuse it with another substance such as nitrogen.

Pemex has struggled to take advantage of crude prices to meet its capital spending needs. A commercial debt swap with suppliers for new notes in July was considered a flop, with Pemex raising less than it planned. A refinery project with a price tag that has topped $18 billion is also weighing on the company’s bonds.

In July, Moody’s Investors Service cut Pemex’s credit rating by a notch to four levels below investment grade. The company fell into junk after downgrades from major rating agencies in 2020 and 2019.

Pemex’s debt is the highest of any oil company, at $108.1 billion at the end of June. Since the start of Lopez Obrador’s presidency in 2018, Pemex has received more than $20 billion in capital injections and tax breaks.