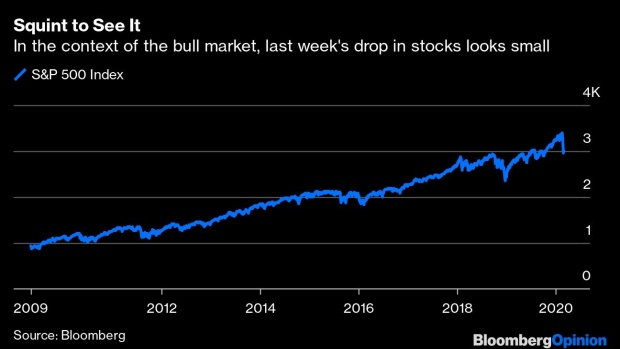 (Bloomberg Opinion) -- Over the weekend, Goldman Sachs Group Inc. economists made what appeared to be a bold call. They predicted Federal Reserve officials would slash interest rates by 50 basis points at their meeting this month, if not sooner, and take the fed funds rate down an additional 50 basis points by the end of June.

The words of Jan Hatzius, Goldman’s chief economist, are closely followed in the $16.7 trillion U.S. Treasuries market. It’s not necessarily that he’s the most accurate forecaster — along with strategists at JPMorgan Chase & Co., Hatzius stuck with a call of four Fed interest-rate hikes in 2019 as late as December 2018 — but he will occasionally voice frustration at how the central bank is following financial markets rather than economic data. That’s a popular criticism and strikes at the heart of the Fed’s dilemma around the worldwide coronavirus outbreak.

In July, ahead of three consecutive quarter-point rate cuts from the Fed, Hatzius warned that policy makers were giving the impression that markets were guiding their decisions. That “raises the risk that monetary policy — in the words of former Chair Bernanke — ‘degenerates into a hall of mirrors’ and takes the funds rate far away from the level justified by economic fundamentals,” he wrote.

Markets are certainly in a hall of mirrors now. On Feb. 19, the day the S&P 500 Index reached a record, fed funds futures were pricing in virtually no chance of a Fed interest-rate cut in March and just 13 basis points of easing by mid-year. Even on Feb. 24, after back-to-back days of 3% declines in the S&P 500, traders saw little chance of a move in March, though they viewed one quarter-point reduction by the end of June as a near-certainty.

Now? Fed funds futures are pricing in a full 50 basis points of easing at this month’s Fed meeting. Traders see at least another full quarter-point cut on top of that by the end of June, if not two of them. This sort of rapid repricing helps explain why the two-year Treasury yield tumbled as much as 21 basis points on Monday to 0.71%, the lowest level since 2016, while the benchmark 10-year yield set another record low at 1.03%.

Goldman’s call, in other words, isn’t so much a bold proclamation about aggressive central bank action. It’s simply the bond market’s base-case scenario at this point.

The bank altered its forecast on March 1 for the second time in three days, which Hatzius said reflected Fed Chair Jerome Powell’s rare 44-word statement on Friday. It didn’t make any explicit promises about easing monetary policy, but as my Bloomberg Opinion colleague Tim Duy noted, it used the language “act as appropriate,” which was the same phrase as Powell used last June ahead of the Fed’s rate-cut the following month.

“The clear signal in Chair Powell’s statement has led the bond market to price in more than 25bp of easing, and the FOMC will not want the cut to come as a disappointment in the present situation,” Hatzius wrote.

One notable difference between Goldman’s views on last year’s interest-rate cuts and the seemingly inevitable reductions to come is the bank’s economic outlook. When Hatzius invoked the “hall of mirrors,” he noted that bonds were pricing in multiple rounds of easing “despite mostly encouraging news on growth, inflation and trade policy.” Now, Goldman’s economists are less sanguine. They see global gross domestic product shrinking in the first two quarters of 2020 before rebounding in the second half, implying “a short-lived global contraction that stops short of an outright recession.”

The bond market is yelling this message loud and clear. For all of the focus on U.S. stock markets over the past week, their decline pales in comparison to the move in 10-year Treasuries when broadening out the charts to the entire length of this economic expansion.

And here’s the plunge in benchmark Treasury yields:

It’s still possible the Fed will disappoint bond traders — and Goldman — by only lowering the fed funds rate by 25 basis points on March 18. I find it difficult to reconcile the futures market pricing with comments from central bankers just last week in the midst of the market turmoil. Vice Chair Richard Clarida said it was “still too soon” to judge the coronavirus’s impact on the U.S. economy. Chicago Fed President Charles Evans called it “premature” to think about changing monetary policy. Even St. Louis Fed President James Bullard, who at one point last year advocated for slashing interest rates by 50 basis points, said he “wouldn’t want to prejudge” the March decision. Powell’s statement effectively locked in an interest-rate cut, but the size is hardly guaranteed to match market expectations.

Then again, people familiar with the matter told Bloomberg News that Group of Seven finance ministers and their central bank governors will have a global teleconference on Tuesday to discuss their response to the threat posed by the coronavirus outbreak. That sort of coordinated effort is precisely what Hatzius anticipated. Given that the Fed has among the most room to ease, it stands to reason that it could cover for those with less capacity, like the European Central Bank and the Bank of Japan, with a bigger interest-rate cut in such a scenario.

For now, investors are speaking out loudly: Scott Minerd, chief investment officer of Guggenheim Partners, went so far as to tell Bloomberg News’s Liz Capo McCormick that 10-year Treasury yields could drop to as low as zero with “the majority of the curve at negative rates.” He also made headlines last week for declaring that the coronavirus outbreak was possibly the “worst thing” he’s seen in his career.

Only time will tell whether that’s accurate or just hyperbole. At the moment, two-year Treasuries are the most overbought since 1980, according to relative strength index analysis. But it doesn’t seem to matter. Bond traders are pounding the table for interest-rate cuts and the Fed doesn’t seem likely to deprive them.