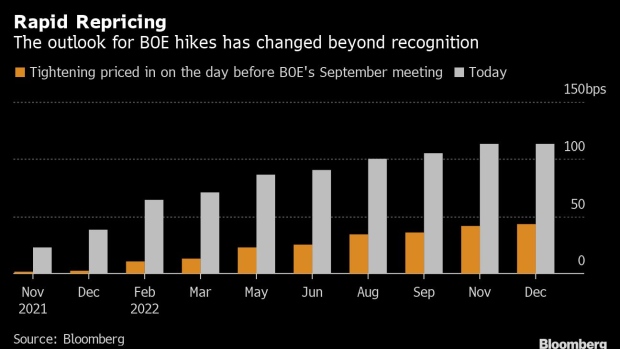 (Bloomberg) -- Economists at some of the world’s biggest banks are following investors in predicting the Bank of England will raise interest rates this year after Governor Andrew Bailey moved to reinforce signals of an imminent move to curb inflation.

Bailey said Sunday that while monetary policy doesn’t have the tools to address price pressures caused by supply shocks, the central bank will “have to act” to prevent higher inflation expectations becoming more entrenched. He didn’t push back against aggressive money-market bets on borrowing costs rising this year.

Allan Monks, an economist at JPMorgan in London, wrote that his best guess is “that Governor Bailey is trying to signal a swifter near-term response and knows he has the backing from the” core of the Monetary Policy Committee.

Monks sees rates going up to 0.25% in November, and then hitting 0.75% by August. Goldman are even more hawkish, seeing three rate hikes at alternate meetings from next month, taking BOE’s benchmark rate to 0.75% by May, before a move to 1% by the end of next year

Economists at the U.S. bank said they expect the U.K. economy to regain its pre-Covid size by October, accompanied by a strong jobs market. Inflation expectations, meanwhile, have “moved up significantly recently,” according to the bank’s own composite metric.

Still, most economists are still less aggressive in their outlook than markets, which are now almost fully pricing in a hike to 0.5% by the end of this year, and a move up to 1.25% by November 2022.

What some economists and markets have in common, however, is a lingering concern moving too quickly, to combat price pressures mainly stemming for supply-chain issues and surges in energy prices, risks being an error.

“The BOE hiking rates on the back of rising energy prices, which are temporary and supply-side driven, and into a slowing economy would be a policy mistake,” said Credit Suisse’s Sonali Punhani.

“On top of other headwinds, we think rate hikes to 0.5% by the first quarter of 2022 can slow the economy such that it gives the BOE room to pause for some time thereafter,” she said.