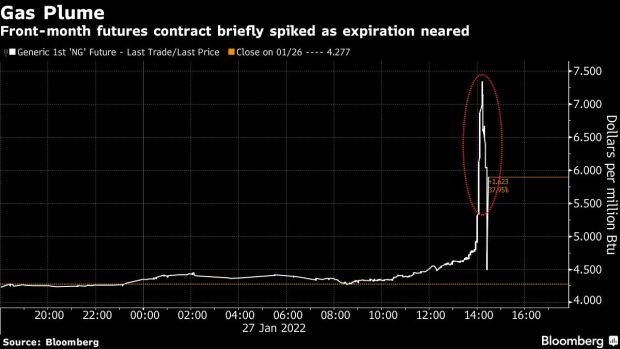 (Bloomberg) -- That unprecedented rally that sent U.S. natural gas futures surging as much as 72% Thursday probably was driven by tight liquidity rather than supply-and-demand considerations, according to Goldman Sachs Group Inc.

A colder shift in weather forecasts almost a year after a record winter storm may have constrained liquidity at a time when traders were seeking to cover bearish bets, Goldman analysts including Samantha Dart said in a note to clients on Friday.

While colder-than-usual conditions and frozen wellheads helped boost prices in recent weeks, short-term fluctuations in the weather outlook were insufficient to explain Thursday’s surge. Price spikes in contracts closing in on expiration have become increasingly common, heightening anxiety among drillers with hedging exposure.

“We do not believe it was driven by fundamentals,” the analysts wrote.