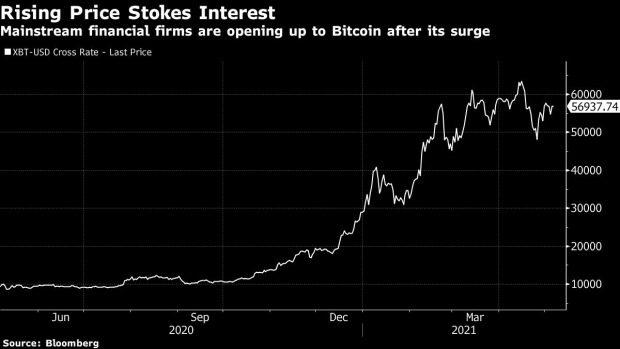 Stacks of bitcoins sit near green lights on a data cable terminal inside a communications room at an office in this arranged photograph in London, U.K., on Tuesday, Sept. 5, 2017. Bitcoin steadied after its biggest drop since June as investors and speculators reappraised the outlook for initial coin offerings. Photographer: Bloomberg/Bloomberg , Photographer: Bloomberg/Bloomberg

The investment bank has opened up trading with non-deliverable forwards, a derivative tied to Bitcoin’s price that pays out in cash. The firm then protects itself from the digital currency’s famous volatility by buying and selling Bitcoin futures in block trades on CME Group Inc., using Cumberland DRW as its trading partner. Goldman, which still isn’t active in the Bitcoin spot market, introduced the wagers to clients last month without an announcement.

“Institutional demand continues to grow significantly in this space, and being able to work with partners like Cumberland will help us expand our capabilities,” said Max Minton, Goldman’s Asia-Pacific head of digital assets. The new offering is “paving the way for us to evolve our nascent cash-settled crypto-currency capabilities.”

Goldman Sachs, which restarted a trading desk this year to help clients deal in publicly traded futures tied to Bitcoin, said in March it was also close to offering private wealth clients additional vehicles to bet on crypto prices. But the push into forwards dramatically increases its capacity to help big investors take positions. The partnership with Cumberland underscores the bank’s willingness to work with outside firms to help it do so, according to people familiar with the matter, speaking on the condition they not be identified.

For years after its creation in 2009, Bitcoin was shunned by Wall Street banks, with JPMorgan Chase & Co. Chief Executive Officer Jamie Dimon once threatening to fire any of his traders caught buying and selling the digital currency. While Dimon later softened his tone, the banking world has long seen Bitcoin as a plaything for criminals, drug dealers and money launderers.

But client interest and Bitcoin’s astronomical price gains -- reaching a high of almost $65,000 in April -- have turned many bankers around, with Morgan Stanley making a Bitcoin trust product available to its customers and JPMorgan working on a similar offering.

“Goldman Sachs serves as a bellwether of how sophisticated, institutional investors approach shifts in the market,” said Justin Chow, global head of business development for Cumberland DRW. “We’ve seen rapid adoption and interest in crypto from more traditional financial firms this year, and Goldman’s entrance into the space is yet another sign of how it’s maturing.”

Banks are still wary of the regulatory challenges of holding Bitcoin outright. As derivatives settled with cash, the products Goldman Sachs is offering don’t require dealing with physical Bitcoin. In a similar way, the Morgan Stanley and JPMorgan trusts give customers access to vehicles tracking Bitcoin’s price while using a third party to buy and hold the underlying digital asset.

Goldman Sachs may next offer hedge fund clients exchange-traded notes based on Bitcoin or access to the Grayscale Bitcoin Trust, one of the people said.

“The crypto ecosystem is developing rapidly,” Chow said. “There is progress being made in offering ETFs, new custody providers coming online and optimism that regulatory efforts are coming into focus. It’s a great time to be in the space.”