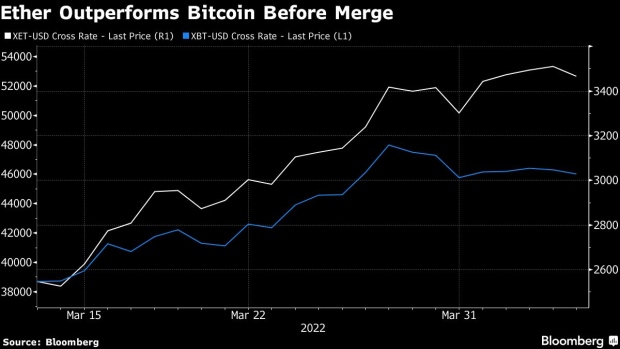 Options are used by crypto investors to hedge risks or boost yields, and over-the-counter transactions are typically larger trades negotiated privately. Ether has a market value of $417 billion, making it the largest coin behind Bitcoin at $876 billion.

At Goldman, client conversations have increasingly shifted to Ether, which is now seen as “more of an investable asset class,” George Lewin-Smith, an associate on the bank’s digital-assets team, said during the panel. Goldman still doesn’t offer spot crypto trading, but it provides access to European and Canadian exchange-traded products that can be used as a proxy, according to Kazantsev.

Ether’s price has surged more than 32% and outperformed Bitcoin since March 15, when it passed the last major test before a long-anticipated software update called “the Merge.” Ether’s most important technical upgrade since its inception in 2015, the Merge would reduce the blockchain’s carbon footprint and improve its efficiency and scalability.

Several technical updates before the Merge have slowed Ether’s new supply, sending the token’s price higher. The update is set to be implemented this year.