Goldman Sachs Group Inc. joined other big U.S. banks in cashing in on continuing pandemic-induced volatility, as the firm’s bond traders posted the biggest jump on Wall Street so far.

Third-quarter revenue from buying and selling stocks and bonds increased 29 per cent, driven by a 49 per cent surge in fixed-income trading and mirroring similar gains reported Tuesday by JPMorgan Chase & Co. and Citigroup Inc. Revenue at each of Goldman’s four divisions rose from a year earlier, pushing earnings per share to a record that was almost twice as high as analysts predicted.

Many investors were expecting Goldman to beat estimates, “but nowhere close to this order of magnitude, with strength coming from both high- and low-quality sources,” Steven Chubak, an analyst at Wolfe Research, wrote in a note. “Whatever your whisper number was, they crushed that too.”

Trading gains since the start of the pandemic have helped offset weakness in consumer businesses at the nation’s biggest banks, where loan-loss provisions piled up in the first half of the year. For Goldman, which is still a minnow in the world of retail banking, dealmaking and trading divisions have helped cushion its stock price from the kinds of steep declines some of its competitors have experienced.

The firm also posted a surprise drop from a year earlier in its loan-loss provisions, echoing its bigger rivals in socking away a much smaller amount for credit losses. The stockpile amounted to just US$278 million in the third quarter, down from US$1.6 billion for the previous three months. The decline was mostly tied to corporate and consumer borrowers paying down loans, Goldman said. 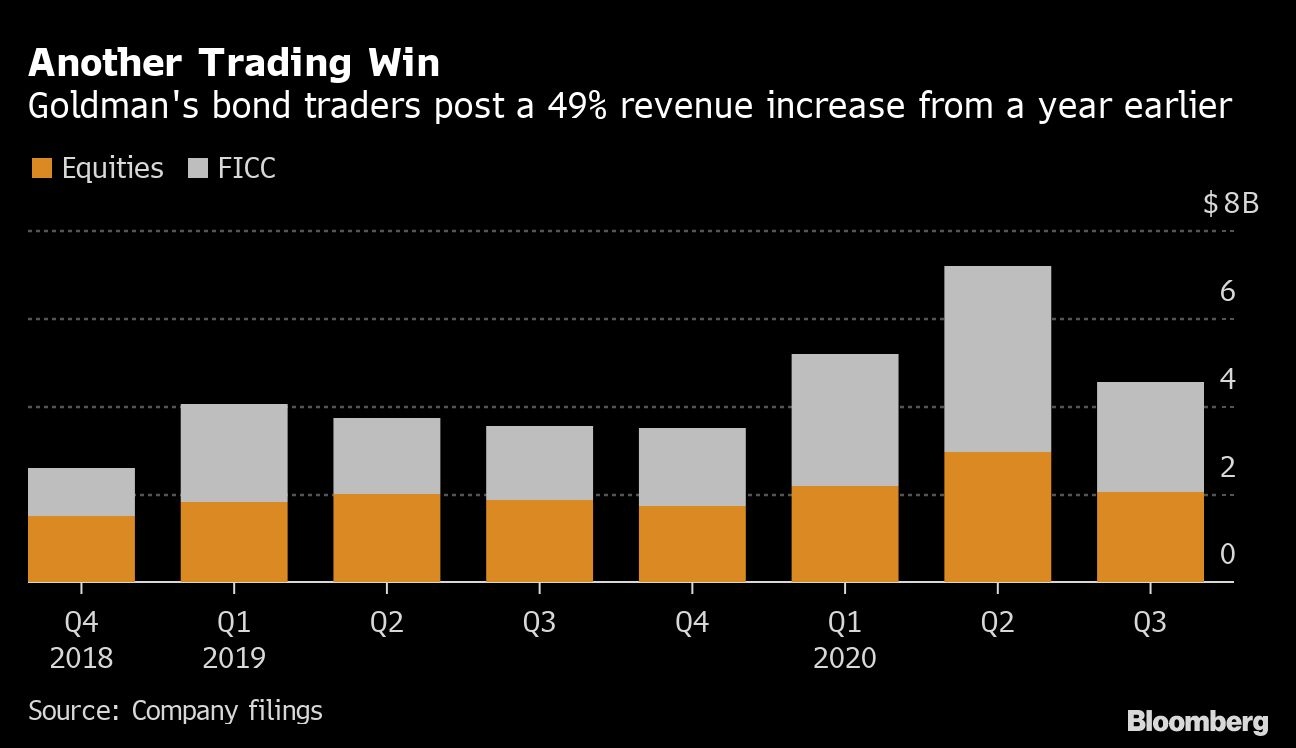 Citigroup’s bond-trading revenue jumped 18 per cent from a year earlier and its stock traders saw a 15 per cent increase. At JPMorgan, fixed-income trading revenue increased 29 per cent and equities advanced 32 per cent. Bank of America Corp. missed out on the surge, posting a 3.6% climb that fell short of estimates.

Goldman’s fees from helping put together deals for companies dropped 27 per cent to US$507 million. Underwriting revenue of US$1.43 billion topped analysts’ average estimate of US$1.3 billion. Goldman’s consumer operation cracked US$1 billion in trailing 12-month revenue for the first time since it started operations four years ago.

The firm’s equity investments delivered US$1.4 billion of gains, more than double that of a year earlier, as it benefited from rallying markets, according to a statement from the New York-based firm Wednesday. That generated a bigger increase for the US$3 billion public-equities portfolio than for the firm’s US$16 billion in private holdings.

The bank’s lending portfolio also stayed on the mend after a big writedown at the start of the year. Goldman has been working to manage more client money to generate steady recurring fees, even though the strategy limits big wins that could come from wagering more of its own money. It’s closing in on raising about US$14 billion for a new credit fund -- the biggest pool of investment cash it has raised in more than a decade.

Goldman’s consumer deposits climbed at a slower pace than in the second quarter. Its money-management arm posted a 3 per cent drop in assets under management, mostly driven by a decline in liquidity products.

Net income almost doubled from a year earlier to US$3.62 billion. Earnings per share were a record US$9.68, far surpassing analysts’ estimates for US$5.53.

--With assistance from Felice Maranz.