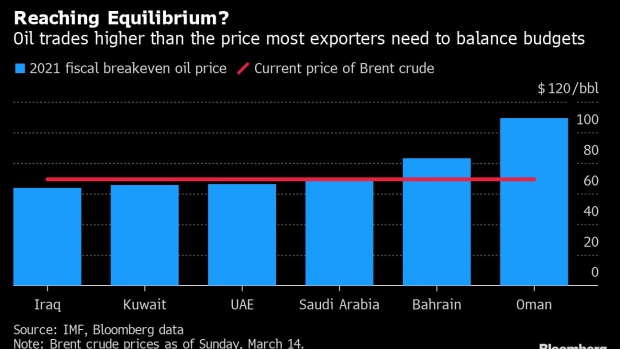 (Bloomberg) -- The Gulf Cooperation Council’s borrowing requirements could drop to $10 billion over the next three years from about $270 billion, if oil prices continue to stay elevated, according to Goldman Sachs Group Inc.

If prices for the commodity average $65 a barrel and all else is equal, borrowing needs for the six countries comprising the council would drop 96% from what they’d be if oil traded at $45, Farouk Soussa, an economist at the bank wrote in a report.

Oil prices have rallied almost 80% since the start of November to about $70 a barrel as major economies roll out coronavirus vaccines and the OPEC cartel -- which is dominated by GCC member Saudi Arabia -- implement deep production cuts.

The average price needed to balance GCC members’ current accounts is relatively lower at $50 per barrel, Goldman said, giving comfort regarding the external outlook and the resilience of currency pegs, even if prices decline from current levels.

“The implications for sovereign balance sheets, creditworthiness and debt markets would be significant,” according to Soussa, “but we highlight the likelihood that some of the fiscal space afforded by higher oil prices is likely to be erased by higher spending.”