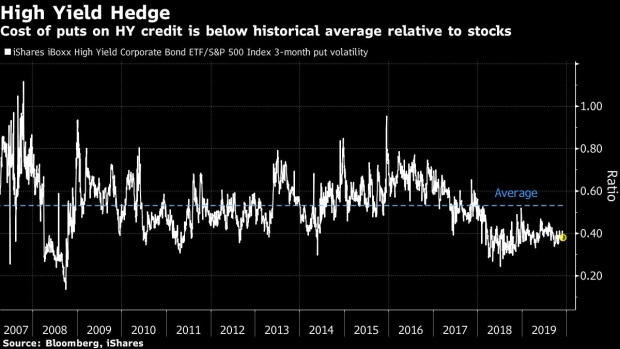 (Bloomberg) -- Investors skeptical about the recent U.S. risk-asset rally should look to the high-yield corporate bond market to protect their portfolios, according to Goldman Sachs Group Inc.

The cost of bearish put options on the iShares iBoxx High Yield Corporate Bond exchange traded fund is historically cheap relative to those of the S&P 500 Index, strategists including Christian Mueller-Glissmann wrote in a note Friday. However, corporate credit losses have been similar to those on stocks in past risk-off periods, they said.

“We still like HYG puts as a tail protection hedge,” the strategists wrote, referring to the ticker for the corporate-bond ETF. “Potential credit losses during downturns have been similar to equities and even greater on some occasions, such as when defaults picked up in 2016.”

A combination of optimism over a phase one U.S.-China trade deal and hope the global economy is recovering from a midyear slowdown helped American stocks climb to record highs last week. The S&P 500 has returned 28% this year, while the HYG ETF has seen a total return of 12%.

To contact the reporter on this story: Cormac Mullen in Tokyo at cmullen9@bloomberg.net

To contact the editors responsible for this story: Christopher Anstey at canstey@bloomberg.net, Joanna Ossinger, Andreea Papuc