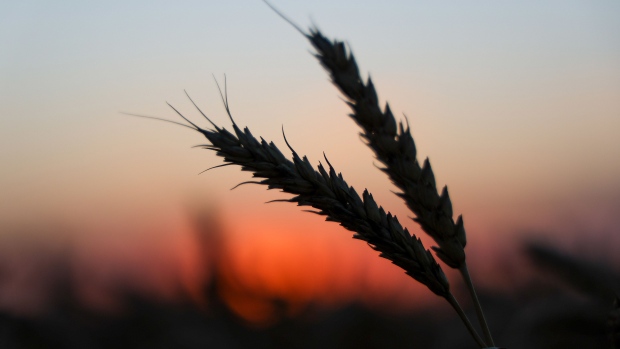 Wheat kernels during the summer harvest on a farm at sunset in Tersky village, near Stavropol, Russia. , Bloomberg

(Bloomberg) -- Grain prices are set to jump even more as war in Ukraine and sanctions on Russia upend supplies from the Black Sea region, Goldman Sachs Group Inc. said in a note Tuesday.

Shipping lines disruptions, surging input costs and concerns about new plantings in Ukraine set the global grains market on track for the “sharpest shock” since the so-called Great Grain Robbery in the 1970s, according to Goldman. That was when prices skyrocketed after it was revealed the Soviet Union cut a deal that effectively wiped out U.S. wheat inventories.

Goldman increased its forecasts for corn, soybean and wheat prices. Corn could reach $7.75 per bushel by summer, while soybeans could trade at $17.5 and wheat at $12.5 per bushel. “We see clear upside pressure across global grains curves, with the new-crop grains contracts lagging the front as the market waits to see the extent of the disruption in Ukrainian planting,” Goldman analysts including Daniel Sharp said.

Export prices will have to surpass local levels to lure regional inventories for corn in the U.S. and wheat in Europe into global markets, the note said, to mitigate the fallout from Russia and Ukraine, which provided a quarter of the world’s grains needs. Wheat’s premium over corn needs to be maintained to prioritize its use in food over feed, while higher prices for new crops are required to encourage growers to add acreage amid soaring costs of everything from fertilizers to energy.

Goldman said traders should reduce bets that the U.S. will step in and feed the global grains demand. Farmers there have little spare capacity to increase acreages, which are already near records, and crop nutrients are too expensive to provide an easy solution to increase yields. That’s on top of Ukraine corn planting and the winter wheat harvest likely to be upended by the war.

“We remain bullish across new-crop contracts in cotton, corn, and soybeans, with potential for significant additional upside on unfavorable U.S. weather or Ukrainian disruptions,” Goldman said. Prices for the new crops of corn and cotton are seen to gain the most as they catch up with wheat, which has lower input costs.