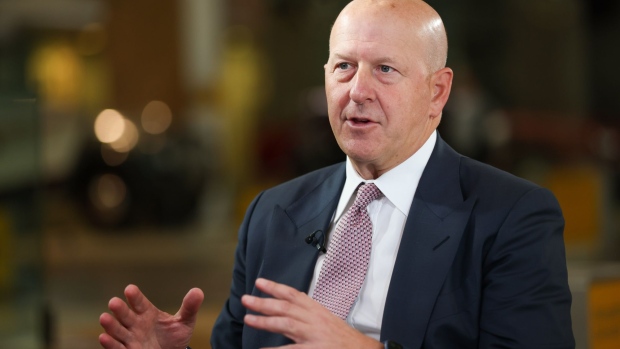 (Bloomberg) -- It was once one of the strongest engines in Goldman Sachs Group Inc.’s trading powerhouse before seeming to weaken with every year. By 2017, the bank’s commodities desk was failing to generate $300 million -- less than a 10th its heyday -- and top executives were worried about its future.

But in a comeback that underscores Wall Street’s change of fortunes amid the pandemic, the unit’s revenue shot past $2.2 billion in the final months of 2021 -- topping a windfall it generated in 2020 for its strongest performance in a decade. That’s adding credence to the notion of a revival.

Goldman’s energy traders, in particular, have thrived on the wild ride: profiting in the months after outbreaks began as oil prices turned negative for the first time ever, and then benefiting again from power grid failures in the U.S. and the frenzied moves in European markets at the end of last year.

Ed Emerson, the head of the desk who stuck around as peers and supportive bosses left before its turnaround, will be among the highest-paid partners at Goldman this bonus season, people with knowledge of the matter said. In a year of record profits, pay for some of the firm’s top performers will surpass $30 million, the people said. That’s more than the company has awarded its chief executive officer in recent years.

Goldman hasn’t disclosed the commodities desk’s revenue. The firm is scheduled to report fourth-quarter results Tuesday and doesn’t typically break out the unit’s earnings, which are wrapped into the broader fixed-income segment.

A company spokeswoman declined to comment on the figures and internal deliberations described in this story by people involved in the discussions.

After years of malaise, commodities are once again drawing interest and investment on Wall Street as prices surge. Goldman’s own in-house analyst Jeff Currie -- widely followed in energy markets -- recently suggested dislocations around the world could create a “supercycle” that lasts a decade. He rose to fame after predicting the China-driven boom of the 2000s and that decade’s surge in oil prices above $100 a barrel.

The commodities unit has played starring roles in Goldman’s ups and downs for decades, ever since a broker in that business -- J. Aron & Co. -- enlisted the investment bank’s help to sell itself at the start of the 1980s. Goldman, spotting an opportunity to expand, offered to be the buyer. The transaction paved the way for a group of commodities executives who would eventually run trading, investment management, human resources and even the whole company -- with Lloyd Blankfein and Gary Cohn rising to CEO and president.

It was Blankfein’s support for the commodities business that helped spare it from being dismantled during the industry’s long slump in the past decade. As Blankfein prepared to hand off his CEO title in 2018, he unsuccessfully tried to persuade Isabelle Ealet to delay her exit as co-head of trading until the commodities desk, which she previously ran, was out of danger, a Goldman executive said at the time.

Other veterans of the group headed for the exits as well. When both of his co-chiefs departed within a matter of months, Emerson, 45, suddenly found himself holding the top seat alone in 2019, right before the market’s turn.

The Argentina-born, polo-playing Brit is described by colleagues as protective of his staff but also unerringly commercial -- a compliment in some Wall Street circles that emphasizes a focus on profits over niceties. In internal discussions, he’s known to relentlessly argue his views and sometimes butt heads with bosses.

He’s also known for his off-beat humor. While atop the unit, he took a vacation to Costa Rica and littered fake snakes around the house in the middle of the night to scare his travel companions.

Emerson rose up through oil trading during an era of spectacular profits in the 2000s, a time when Goldman’s name commanded undisputed respect in those markets.

To investment bankers, commodities trading can look scary -- too volatile and potentially risky. When veteran dealmaker David Solomon took over from Blankfein in 2018, the team of colleagues he elevated sweated over the capital allocated to commodities, the paltry revenue it was generating and the miserable return on equity that might antagonize shareholders.

Some months in, Goldman President John Waldron tried to reassure the commodities group that the firm wasn’t getting out of the business. Emerson and senior executives campaigned to keep the core of its operations intact, making the case that its best years came in moments of tumult. Part of the idea was that if activity resumed, Goldman could be better positioned than rivals to capitalize.

Ultimately, the ax never swung. Instead, the business found ways to snip costs. It also sought to further embrace electronification -- a service dubbed e-Aron in an ode to the group’s roots.

By 2019, the desk was on steadier footing. And then came Covid-19. The bank thrived amid swings in oil and precious metals. Last year, it navigated turmoil in gas and power trading, capitalizing on price spikes in Europe that hurt many big energy consumers.

Across Wall Street, large U.S. investment banks have seen their earnings soar in the past two years, driven by flurries of investor trading and corporate dealmaking. Goldman’s shares advanced 45% last year, their best annual performance since their post-crisis rebound in 2009.

Even if markets normalize and revenue from commodities shrinks anew, the team has once again cemented itself as an integral part of Goldman’s trading arm.

That’s quite a turn from just a few years ago, when Emerson was under pressure to right the business. He examined a variety of possibilities for the desk, including a proposal to significantly shrink it down -- a scenario in which he would have elected to leave.