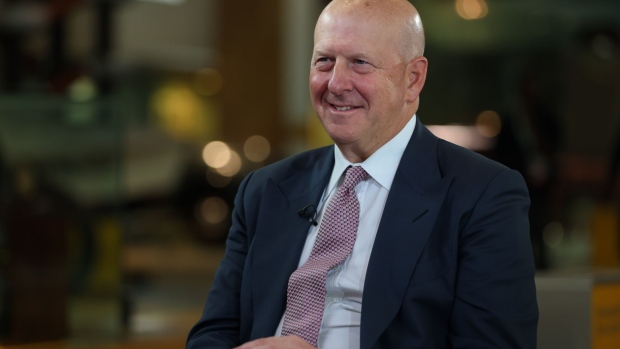 David Solomon, chief executive officer of Goldman Sachs Inc., during a Bloomberg Television interview on the sidelines of the Global Investment Summit (GIS) 2021 at the Science Museum in London, U.K., on Tuesday, Oct. 19, 2021. U.K. Prime Minister Boris Johnson is hosting the summit, where as many as 200 CEOs and investors are expected to gather. , Bloomberg

(Bloomberg) -- The top 1% at Goldman Sachs Group Inc. is set to receive a special one-time reward in addition to annual bonuses, recognizing the Wall Street titan’s roaring success through the pandemic.

The unusual payments to partners -- the roughly 400 executives who fill out the investment bank’s highest rung -- will add millions of dollars to many compensation packages, according to people with knowledge of the matter, who asked not to be identified discussing internal decisions. That group is already in line for larger payouts that range from a few million dollars to multiples of that after a year of record earnings.

Goldman’s management, under pressure to fend off increasingly aggressive poaching on Wall Street, views the extra boosts as a creative solution that will come with a warning: Recipients shouldn’t mistake the bumps as part of a new pay floor, two of the people said. When compensation is set next year, managers will ignore the one-time payouts when making comparisons.

That lets Goldman leaders dip into the bank’s pot of riches from 2021 to reward its most-prized employees, while trying to temper expectations -- and costs -- going forward.

Bosses across Wall Street are sweetening payouts this year after showing restraint in the first half of a two-year trading and dealmaking boom unleashed by the pandemic. At the end of 2020, they were wary of appearing extravagant amid Covid-19 outbreaks and uncertain the boom will last. Now, they are feeling the pressure to open up their wallets to keep top producers happy and prevent them from jumping ship.

The Goldman partnership is a holdover from its 130-year-history as a private company, when its leaders put up their own capital to finance deals and trades. In the modern Goldman, the partner title still holds symbolic value, signaling their top standing in the firm’s hierarchy.

The executives, many of whom lead teams across the company’s operations, typically get base pay of around $1 million that’s usually dwarfed by their year-end cash-and-stock bonus. Over the previous decade, the compensation spread between partner pay and rank-and-file managing directors had been getting squeezed amid a desire to keep a lid on costs.

But the onset of the pandemic and the resulting dislocations and opportunities across markets have given a once-in-a-generation lift to Goldman’s core trading and dealmaking operations. Those successes helped the firm post near record revenue in 2020, and eclipse that mark in just the first nine months of 2021.

The new reward is reminiscent of another moment in Goldman’s past when the firm sought ways to keep its partners happy. At the end of 2008, after revenue slumped more than 50%, the bank’s leaders granted options that would soar in value if the stock rebounded.

Those millions of options were meant to assuage executives sulking over pay cuts that year. Their value swelled handsomely in the decade after that, with holders reaping more than $3 billion as the stock recovered and shot up.

Analysts estimate Goldman’s revenue surged more than 30% last year. The bank is set to post its fourth-quarter figures on Jan. 18.