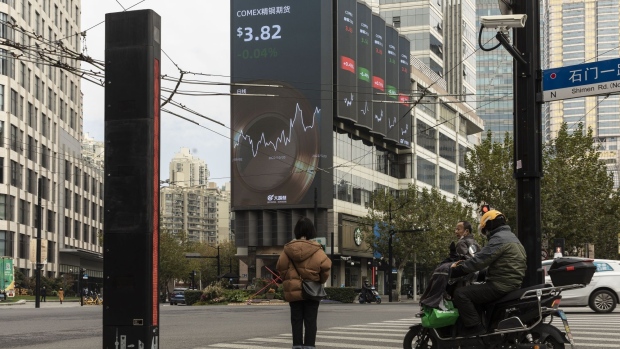 A public screen displaying stock figures in Shanghai, China, on Wednesday, Dec. 7, 2022. China eased a range of Covid restrictions Wednesday, including allowing some people to quarantine at home rather than in centralized camps and scrapping virus tests to enter most public venues — a sharp change in national strategy to quell public discontent and fire up the economy again. Photographer: Qilai Shen/Bloomberg , Bloomberg

Goldman Sachs Group Inc. President John Waldron said China’s road to reopening could be “bumpy,” which coupled with the scenario of a mild recession in Europe and the US could lead to a tougher economic climate.

“That will obviously have some negative implications for growth,” Waldron said via video link at Shanghai’s Bund Summit.

The remarks underscore how lenders are gauging the impact of China’s pivot from a Covid Zero policy as well as geopolitical tensions and a slump in dealmaking. Global banks are quietly cutting China-focused investment bankers as doubts grow over whether the country will ever become the deal and fee machine once envisaged.

“We will continue to be large investors in the country, and we’re excited about the forward opportunity,” he said.

China’s Covid outbreak has shown little sign of easing, even as the country loosened testing requirements in its latest push to shift away from the Covid Zero strategy. The country reported 13,272 new local cases for Friday, still hovering at an elevated level.

Meanwhile, the tally for Beijing city continued to drop with new cases at 2,223 for Dec. 9. The sudden drop in the city’s official daily case numbers has invited skepticism from members of the public who are seeing infection spread quickly through the capital.

The Asian nation is expected to see a further jump in infections as it moves toward exiting Covid Zero, which would spur more economic disruption.