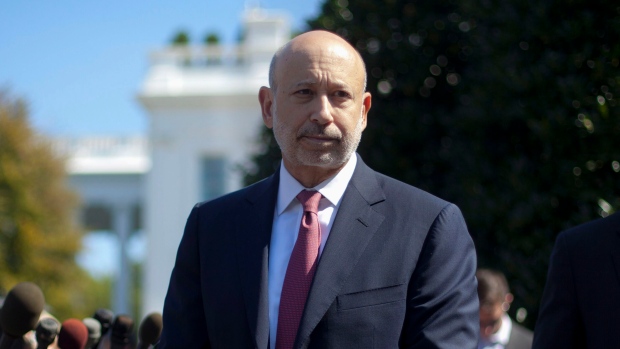 Goldman Sachs Group, Inc. Chairman and CEO Lloyd Blankfein, left, and Bank of America CEO Brian Moynihan, right, walk away from the microphones after speaking to members of the media outside the West Wing of the White House in Washington, Wednesday, Oct. 2, 2013 , The Canadian Press

In a voicemail to employees on Sunday, Blankfein said diversity was a hallmark of Goldman's success, and if the temporary freeze became permanent, it could create "disruption" for the bank and its staff.

"This is not a policy we support, and I would note that it has already been challenged in federal court, and some of the order has been enjoined at least temporarily," Blankfein said, according to a transcript seen by Reuters.

Most U.S. corporate bosses have stayed silent on Trump's immigration curbs, underscoring the sensitivities around opposing policies that could provoke a backlash from the White House.

While Apple Inc (AAPL.O), Alphabet Inc's Google (GOOGL.O) and Facebook Inc (FB.O) emailed their staff to denounce the order, many of their counterparts in other industries either declined to comment or responded with company statements reiterating their commitment to diversity.

Top BlackRock Inc executives including CEO Larry Fink sent a memo to staff on Monday saying Trump's order presented "challenges" to its goals of diversity and inclusion. BlackRock is examining the direct impact on its employees, as well as the broader implications of the order, they said.

"We, of course, all want to promote security and combat terrorism, but we believe it needs to be done with respect for due process, individual rights and the principle of inclusion," they wrote.'

Citigroup (C.N) CEO Mike Corbat said in a memo to employees on Monday the bank is concerned about "the message the executive order sends" as well as the impact immigration policies might have "on our ability to serve our clients and contribute to growth."

JPMorgan Chase & Co's (JPM.N) operating committee, which includes CEO Jamie Dimon, avoided directly denouncing the policy. In a note to staff over the weekend, the firm said it was reaching out to all employees affected and noted that the country was "strengthened by the rich diversity of the world around us."

Other banks, including Morgan Stanley and Wells Fargo & Co (WFC.N), said they were reviewing the executive order and its implication on staff.

The U.S. hedge fund industry was also virtually silent on the immigration restrictions. Representatives for most major firms —including Bridgewater Associates, Renaissance Technologies, Millennium Management and Two Sigma Investments — did not respond to requests for comment over the weekend.

People familiar with some of the banks' and firms' decisions in making public statements said a fear of riling President Trump was inhibiting most CEOs' responses.

Since the election, he has taken to Twitter to excoriate certain companies, causing stock price swings. And because Wall Street is hoping for an easing of financial reform regulations, most firms want to stay in Trump's good graces, they said.

The tepid responses from many of Blankfein's peers made his comments all the more potent, especially because Goldman has gotten attention for the number of its alumni who have joined Trump's administration.

The most high-ranking Goldman executive to have joined the Trump administration is former Chief Operating Officer Gary Cohn, who left the bank in December to become head of the White House National Economic Council. Others include Treasury Secretary nominee Steven Mnuchin and Trump advisers Steve Bannon, Anthony Scaramucci and Dina Powell.

Those recruits have put the Goldman back in the spotlight as a bank that long had influence in government and public policy, from the days of the Great Depression to the 2008 financial crisis.

But after the bank was embroiled in scandals over its mortgage-market bets, it embarked on a campaign to improve its image. Blankfein has promoted its focus on philanthropy and diversity initiatives, as well as Goldman's role in job creation.