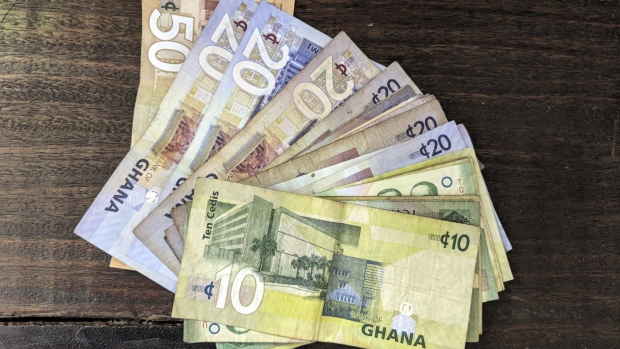 Ghana cedi banknotes sit arranged on a table in Accra, Ghana, on Thursday, March 15, 2018. Ghana wants to shake up the way it collects tax with the International Monetary Fund telling the government that it’s not raising sufficient income. , Bloomberg

The route to the peak includes increases of 150 basis points in the first quarter of next year with risks titled toward a higher terminal policy rate, economists Bojosi Morule and Andrew Matheny, who correctly forecast Monday’s increase, wrote in a research note.

That’s as foreign-exchange reserves that stood at $6.7 billion, or 2.9 months of import-cover in October, may decline to $5 billion to $6 billion at the end of the year and the nation’s currency may face further pressure, they said.

Ghana’s monetary policy committee has cumulatively increased rates by 13.5 percentage-points since November to 27% to subdue inflation that’s now quadruple the 10% ceiling of its target band. The central bank has carried out its tightening campaign in conjunction with steps taken by the government to restore fiscal credibility, regain investor confidence and stem a slide in the cedi.

The West African nation cedi is down 57% this year against the dollar, the worst performance of any currency tracked by Bloomberg, and its debt is junk-rated. Its struggles have locked it out of international debt markets, led to portfolio reversals and its balance of payments to swing to a deficit in the first nine months of this year, from a surplus in 2021.

In July, the nation turned to the International Monetary Fund for a credit facility in a bid to help anchor price stability and fund its economic program.

--With assistance from Antony Sguazzin.