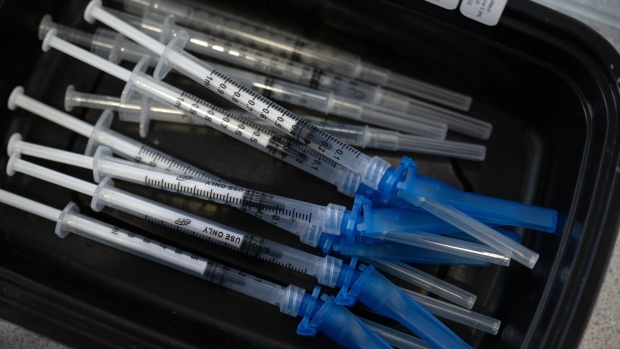 (Bloomberg) -- Goldman Sachs Group Inc. is imposing a vaccine mandate on its Hong Kong employees, requiring all staff to get their shots before entering its offices as the city is grappling with a recent omicron outbreak.

The rules will come into effect as of Feb. 24 and also include visitors, according to an internal memo confirmed by a Hong Kong-based spokesman.

Hong Kong is in the process of implementing a vaccine mandate, obligating people to have been inoculated before they can enter restaurants and other public venues. The financial hub has continued to hew to a zero-tolerance approach along with mainland China, a strategy that’s now triggering increasingly aggressive measures as the more transmissible omicron and delta variants have emerged. The city has also lagged behind other financial centers in vaccination coverage, particularly among the elderly.

Goldman employees, who previously preferred not to disclose if they are vaccinated, will be asked to declare their status. Those who are not fully vaccinated by the deadline will need to work from home, the memo said.

As one of Wall Street’s staunchest advocates of returning employees to the office, Goldman made the Covid-19 vaccination booster shots compulsory in the U.S. last month, requiring anyone entering their offices to get a third shot by Feb. 1.