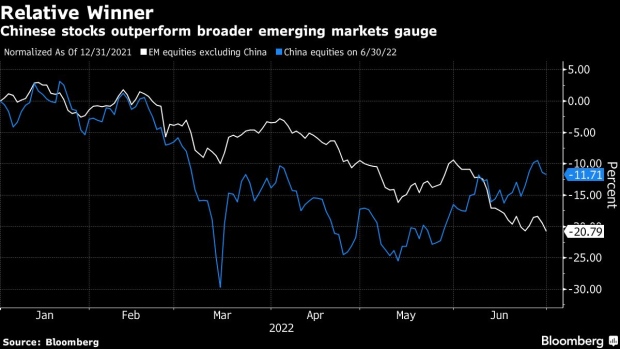 Employees use sewing machines on a garment production line at Alibaba Group Holding Ltd.'s smart factory known as Xunxi, translated literally as "fast rhino", in Hangzhou, China, on Tuesday, Oct. 13, 2020. China’s largest corporation unveiled in September its first smart factory, a secret experiment that Alibaba’s been conducting for three years on the outskirts of its hometown of Hangzhou. , Bloomberg

(Bloomberg) -- Chinese equities will be a bright spot as the fear of a global recession sends shares from the rest of the developing world spiraling, according to Goldman Sachs Group Inc.

Emerging-market stocks could dive another 8% to 15% if the US tumbles into a recession, according to an analysis of previous selloffs. That leaves a pocket of opportunity in the MSCI Inc. gauge of Chinese shares, which could get a boost from improving macroeconomic indicators, said strategists Caesar Maasry and Jolene Zhong in a Friday report.

“Despite market concerns regarding a potential US recession, we expect Chinese equities to remain driven by domestic activity and to be uncorrelated with the rest of the EM complex, at least in the short-term,” they wrote.

MSCI’s key emerging-market index has declined about 19% so far this year as investors juggle concern about rampant inflation and the central bank measures to combat it.

Those losses are short of the average 26% decline typically seen when the S&P 500 Index drops at least 10%, according to Goldman Sachs. The S&P 500 is down about 20% from its peak in January, the threshold for a bear market.