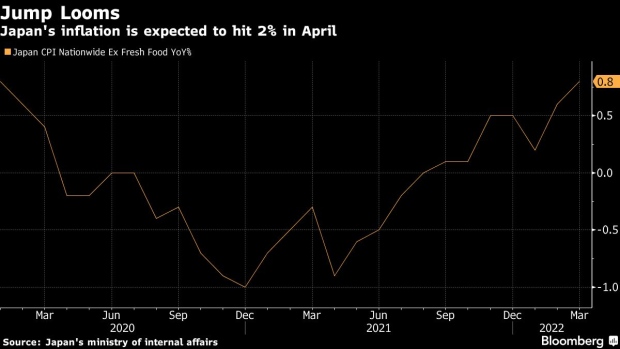 A customer pushes a shopping cart with a basket filled with food at a Takeya Co. store in the Ueno District of Tokyo, Japan, on Wednesday, April 20, 2022. Japan is scheduled to release its consumer price index (CPI) figures for March on April 22. Photographer: Akio Kon/Bloomberg , Bloomberg

Core inflation excluding fresh food will increase 1.6% this year this year and 1.9% next year, analyst Tomohiro Ota wrote in a note Tuesday. Both forecasts are 0.2 percentage point higher than the brokerage’s previous projections.

The revisions come as Goldman Sachs now expects the yen to be weaker against the dollar compared with its previous forecast. The pair will be at 128 yen in three months and 123 yen in a year, Ota wrote.

Food inflation in April beat the brokerage’s assumptions, and “with companies already signaling plans to hike food prices for many products in June, we assume food inflation will continue to accelerate in the near term,” Ota wrote.

Inflation momentum is also being fueled by a number of railway operators and taxi companies that plan to raise fares, increases that are very rare in Japan, according to the note.

A report due Friday is expected to show core inflation jumping to 2% in April from 0.8% as energy costs continue to climb and the impact of lower mobile phone fees starts to fade out.