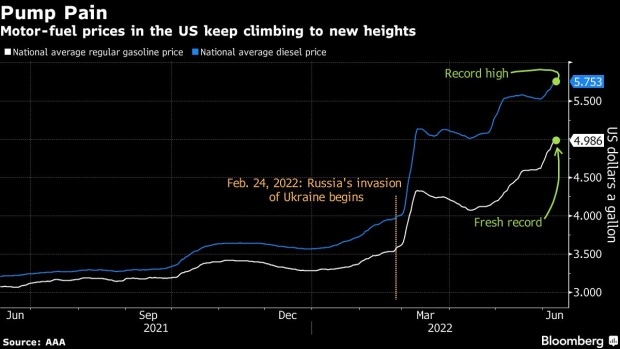 (Bloomberg) -- Energy prices would have to climb further for Americans to start cutting consumption, according to Goldman Sachs Group Inc.

Oil prices have surged more than 60% this year, exacerbated by Russia’s invasion of Ukraine, with West Texas Intermediate futures trading around $120 a barrel. Tighter supplies have helped push the costs of transportation fuels to records, with the national average of gasoline pennies away from $5 a gallon and diesel at $5.753 a gallon, according to auto club AAA.

With economic growth still robust around the world, oil demand is growing, Courvalin added. And so far, the momentum has shown that consumer resilience is “still sufficient to absorb the higher prices at the pump.”

Despite record fuel prices, US gasoline demand ticked up to the highest level this year, according to the latest data available from the Energy Information Administration. Even so, demand is still down by around 1% from this time last year and nearly 6% from the same period in 2019.