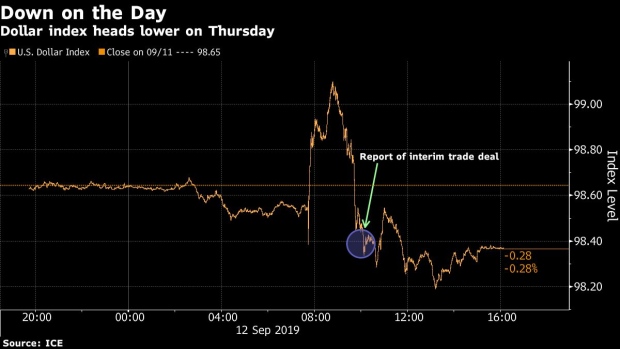 (Bloomberg) -- The Trump administration’s trade war with China, along with a flight-to-quality in Treasuries, is having more of an impact on the dollar’s value than the Federal Reserve’s policy stance, according to Zach Pandl of Goldman Sachs Group Inc.

“The Fed is not the single biggest factor on the dollar, currently,” Pandl, the firm’s co-head of global FX and emerging-market strategy, said in a phone interview Thursday. Data shows portfolio outflows from almost every country, except the U.S., heading into bonds during August in a “classic flight-to-quality” that also lifted the dollar, he said.

President Donald Trump has railed against the impact that a stronger dollar is having on U.S. manufacturers such as Caterpillar Inc., Boeing Co. and Deere & Co., repeatedly blaming the Fed for failing to cut rates deep enough to weaken the currency.

The greenback declined on Thursday, despite a report that the administration is considering a limited trade deal with China, because “better prospects for global growth tend to lift Treasury yields and weigh on the dollar,” Pandl said.

The dollar’s weakness is likely to be “relatively short-lived,” he said. Both the U.S. and China “have interest in talking over the near term, and that could lead to continued positive news over the next few weeks. But we still see a very high bar to any lasting agreement. We doubt we are on the path of de-escalation.”

Goldman sees the U.S. Dollar Index, which fell by as much as 0.5% Thursday, reaching 99.7 by December versus the current level of 98.4, though “it’s hard to have confidence on which way things will turn out on trade,” Pandl says.

To contact the editors responsible for this story: Benjamin Purvis at bpurvis@bloomberg.net, Nick Baker, Debarati Roy