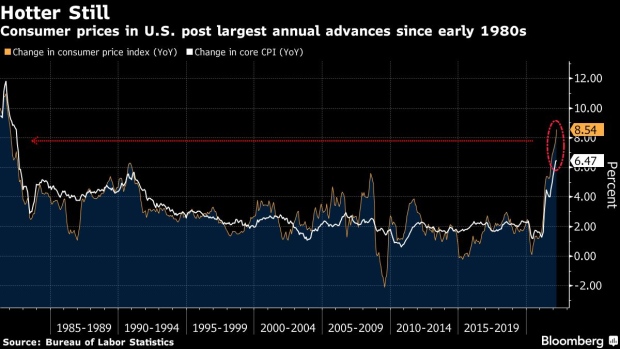 (Bloomberg) -- History suggests that the Federal Reserve will face a difficult task in tightening monetary policy enough to cool inflation without causing a U.S. recession, with the odds of a contraction at about 35% over the next two years, according to Goldman Sachs Group Inc.

The Fed’s main challenge is to reduce the gap between jobs and workers, and to slow wage growth to a pace consistent with its 2% inflation goal by tightening financial conditions enough to reduce job openings without sharply raising unemployment, Chief Economist Jan Hatzius wrote in a research report on Sunday.

Achieving a so-called soft landing may be tough, because historically large declines in the gap in the U.S. have only occurred during recessions.

“Taken at face value, these historical patterns suggest the Fed faces a hard path to a soft landing,” Hatzius said.

A recession isn’t inevitable because post-Covid-19 normalizations in labor supply and durable goods prices will help the Fed, Hatzius said. There are more examples of other countries in the Group of 10 advanced economies -- a group that also comprises Belgium, Canada, France, Germany, Italy, Japan, the Netherlands, Sweden, Switzerland and the U.K. -- that pulled off the soft landing, he said.

Eleven out of 14 tightening cycles in the U.S. since World War II were followed by a recession within two years, but only eight of them can be even partially attributed to Fed tightening -- and soft or “softish” landings have been more common more recently, Hatzius said. He projected the odds of a recession in the next 12 months at about 15%.

Economists recently have seen increasing odds of a U.S. recession, with 27.5% expecting a contraction in a Bloomberg survey in the first week of April, up from 20% a month earlier. They expect the consumer price index to average 5.7% in the final three months of the year, up from the previous 4.5% estimate.