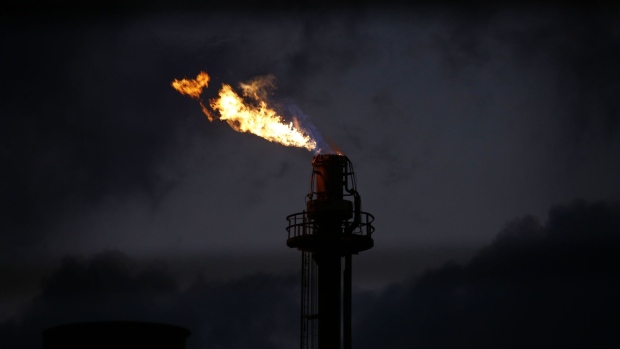 (Bloomberg) -- Goldman Sachs Group Inc. plans to reduce the carbon footprint of its fossil-fuel clients by a fifth, and slash emissions in other key customer groups as it acts on a pledge to make its business climate neutral by mid-century.

By 2030, the Wall Street firm intends to have lowered the financed emissions of oil and gas companies by up to 22%, compared with a 2019 baseline, it said on Thursday. For auto-manufacturing clients, the goal is as much as a 54% reduction, and for power-sector customers it’s up to 65%.

“We’re making progress,” Chief Executive Officer David Solomon said in a statement. “A more sustainable future is within reach, and Goldman Sachs is determined to do our part to help the world get there.”

Banks are slowly adjusting their business models after decades spent enabling some of the world’s worst emitters of greenhouse gases. Since the 2015 Paris climate agreement, global banks provided $4 trillion in financing to the fossil-fuel industry, despite warnings from scientists that the current rate of emissions risks condemning the planet to a climate catastrophe.

This year, the finance industry shifted gears. Goldman is among a number of major U.S. banks, including JPMorgan Chase & Co, and Wells Fargo & Co., that joined the Net Zero Banking Alliance, committing them to net-zero emissions by 2050.

Goldman said its efforts to reduce emissions via loans and debt underwriting focus on industries in which it sees “an opportunity to proactively engage our clients, deploy capital required for transition, and invest in new commercial solutions to drive decarbonization in the real economy.”

The bank also said it chose sectors in which it has sufficient data and the tools that allow it to engage with clients.

Goldman, which reported in line with the Task Force on Climate-related Financial Disclosures, will track emissions intensity to gauge its success. The bank said such an approach reflects “the close tie between the level of a company’s emissions and the scale of its production.” The bank also said its framework will incorporate the use of carbon offsets “where these are high quality, additional and verified.”