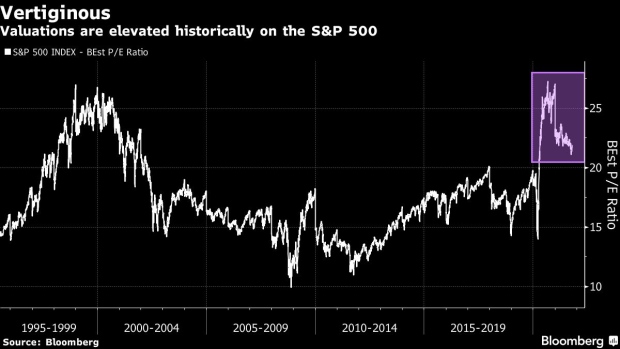 (Bloomberg) -- High valuations won’t be a barrier to increased stock allocations next year due to a lack of alternatives and big cash piles, according to Goldman Sachs Group Inc.

Record allocations by households, foreign investors, mutual and pension funds are set to climb even higher in 2022, Goldman strategists led by David Kostin wrote in a note Friday. This belies the argument that stocks have reached unsustainable heights, with Bank of America Corp. recently saying valuations have accelerated to “extremes.”

Goldman’s gung-ho view on stocks comes amid growing expectations that the Federal Reserve will hike interest rates faster and more aggressively starting toward the end of next year. It sees the 10-year Treasury yield rising to 1.8% in 12 months, and expects both investment-grade and high-yield bond spreads to widen -- which the bank’s strategists say will make them unappealing to investors.

Equity allocations, already at an all-time high of 52%, are on the rise because cash yields are near zero and households own half of the $28 trillion of U.S. cash assets, the strategists wrote.

Goldman expects companies to have $350 billion of net demand for stocks next year due to record buyback authorizations and strong merger-and-acquisition activity. Households and foreign investors will be net buyers of $300 billion, and mutual and pension funds will sell a net $400 billion, it said.