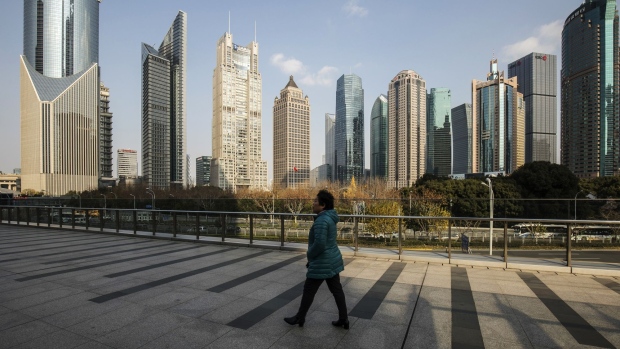 A pedestrian walks on an elevated walkway past buildings in Pudong's Lujiazui Financial District in Shanghai, China, on Friday, Dec. 28, 2018. China announced plans to rein in the expansion of lending by the nation's regional banks to areas beyond their home bases, the latest step policy makers have taken to defend against financial risk in the world's second-biggest economy. , Bloomberg

The probability of a cut in the reserve requirement ratio is lowered, and the People’s Bank of China might reply on open market operations, its medium-term lending facility and targeted tools instead to keep liquidity supply and demand relatively stable, Goldman economists including Maggie Wei and Hui Shan said in a report Saturday.

Targeted tools is likely to refer to the PBOC’s “green” liquidity support tool for reducing carbon emissions, they said.

“Given the large amount of maturing medium-term lending facility (MLF) in the rest of the year, an RRR cut might serve as a tool to replace MLF and thus has little net impact on overall liquidity,” they said. “Amid tight regulations on property financing, shadow banking, and local government borrowing, as well as increased supervision on anti-corruption, credit demand has remained soft.”

At a news briefing on Friday, the central bank vowed to use all kinds of policy tools to keep liquidity reasonably ample. It broke its silence on the debt crisis at China Evergrande Group, saying systemic risks from the developer’s struggles are “controllable” and unlikely to spread.

China’s credit growth slowed in September as weakness in the property market amid the Evergrande crisis weighed on financing and lending, despite the central bank’s call to stabilize credit expansion.