Hedge funds ramped up bets on megacap US tech stocks and whittled down overall holdings to focus on favored names last quarter, with conviction climbing back to levels seen at the start of the pandemic, according to Goldman Sachs Group Inc.

The funds boosted tech and consumer discretionary holdings, while cutting energy and materials wagers, strategists including Ben Snider wrote in a note Tuesday. Separately, average weightings of top 10 holdings jumped to 70 per cent in the three months ended June, the highest concentration since the first quarter of 2020.

Amazon.com Inc. supplanted Microsoft Corp. as the most popular long position, a timely call given that the former has rallied 26 per cent this quarter versus an 8 per cent climb in the latter. The funds also boosted bets on Nvidia Corp., Apple Inc., Atlassian Corp. and Tesla Inc., according to the report.

“Stymied by an uncertain market environment and poor recent returns, hedge funds have cut leverage, shifted back towards growth, and increased portfolio concentrations,” the Goldman team wrote. “Performance has recently improved, matching the typical experience during correction rebounds, though leverage has room to rise if the market remains resilient.” 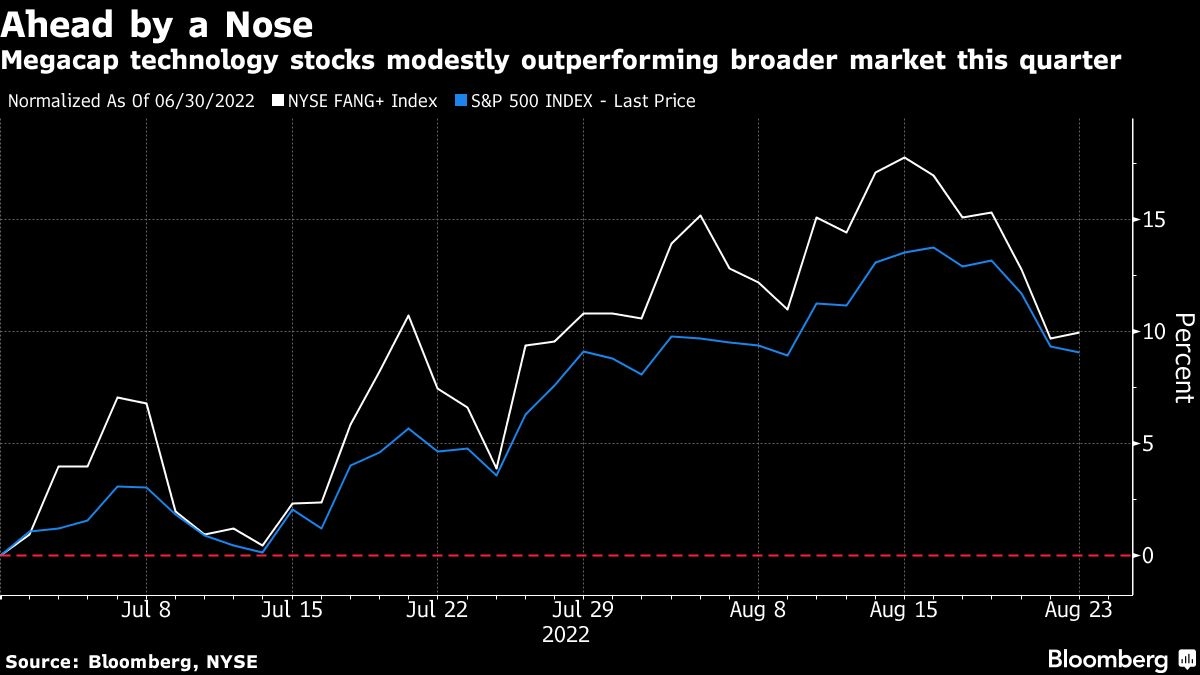 Beleaguered tech stocks got a shot in the arm in mid-June, as traders reassessed bets on the number of future rate hikes by the Federal Reserve after the US economy showed signs of slowing. A gauge of megacap tech stocks has risen 10 per cent this quarter, compared to a 9 per cent rise in the S&P 500 Index.

But the optimism has petered out heading into this week’s Jackson Hole conference on renewed hawkish concerns, with the market split on whether the Nasdaq 100’s near 13 per cent jump in July was anything more than a bear market rally.

“There will likely be more pain ahead as markets are still under-pricing the Fed rate path,” said Charu Chanana, strategist at Saxo Capital Markets Pte.

Within the broader tech space, hedge funds lifted their net exposure in the application software sub-sector where they are overweight, as well as in underweight industries including hardware and semiconductors, the Goldman report found.

In another sign of conviction, position turnover for the funds fell to a record low of 23 per cent.

The study analyzed the holdings of hedge funds with a combined US$2.4 trillion of gross equity positions. The average fund gained 4 per cent since the start of July, narrowing year-to-date losses to 9 per cent, the strategists wrote.

“The recent stabilization of hedge fund leverage and outperformance of the most popular hedge fund long positions are consistent with the typical patterns around previous equity market drawdown troughs,” they added.