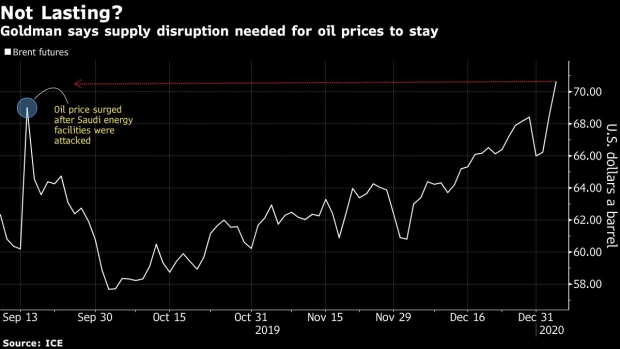 (Bloomberg) -- A flare-up in U.S.-Iran tension may be keeping oil elevated, but an actual disruption to global crude supplies is needed to keep prices at current levels, according to Goldman Sachs Group Inc.

Price risks for Brent, which has surged about 6% since the U.S. strike killed a top Iranian general, are skewed to the downside in the coming weeks without a major supply disruption, Goldman said in a note dated Jan. 6. Oil was already trading above the bank’s fundamental fair value of $63 a barrel prior to the attack, buoyed by an “over-enthusiastic December risk-on rally” despite limited evidence of an acceleration in global growth, they said.

“It is not a given that any potential retaliation by Iran would target oil producing assets,” Goldman analysts including Jeff Currie said. “The recent incident at the U.S. embassy in Iraq occurred while there was no disruption to neighboring oil fields.”

Brent rallied above $70 a barrel and New York crude edged closer to $65 on Monday as the U.S. warned that there’s a “heightened risk” of missile attacks near military bases and energy facilities in Saudi Arabia, while Iran stated it no longer considers itself bound by the 2015 nuclear pact.

The rhetoric turned even more hostile after President Trump warned Iran of major U.S. retaliation “in a disproportionate manner”, and threatened heavy sanctions on its ally Iraq after its parliament voted to expel American troops from the country in response to the Baghdad attack.

The September strike on key oil producing facilities in Saudi Arabia indicated that the market has significant supply flexibility, according to Goldman. There is only “moderate upside” from current levels, even if an attack on oil assets actually occur, the bank said.

Being long gold is a better hedge than oil to such geopolitical risks, according to Goldman, adding that history shows under most outcomes, the precious metal will likely rally well beyond current levels. The bank maintained its three-, six- and 12-month forecast at $1,600 a ounce.

To contact the editors responsible for this story: Serene Cheong at scheong20@bloomberg.net, Ben Sharples