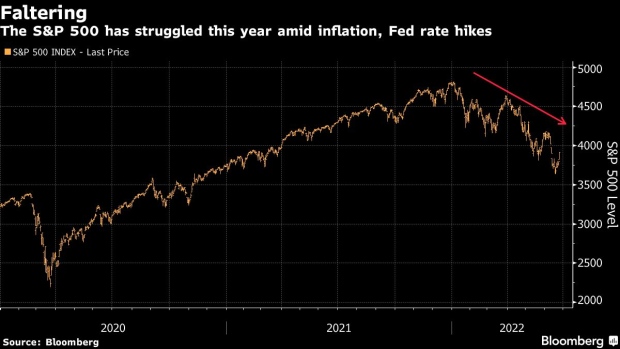 Cheeses on display in a counter at a delicatessen stall in a market in Madrid, Spain, on Wednesday, April 20, 2022. Spain's central bank doubled its inflation forecasts for this year and next, while trimming its outlook for economic expansion, as Russia's invasion of Ukraine fans already-soaring energy costs. Photographer: Emilio Parra Doiztua/Bloomberg , Bloomberg

(Bloomberg) -- The first hints that consumer belt-tightening is passing through to corporate earnings are coming in, posing a bigger risk to US equities than stock-selling by American households, according to Goldman Sachs Group Inc..

High inflation and declining asset prices have started to strain household finances, Goldman strategists led by David Kostin wrote on Friday. They cited the 0.3% drop in retail sales in May and the record-low Michigan consumer sentiment reading for June.

Retailers such as Target Corp. and Walmart Inc. appear to have overestimated consumer demand in some general merchandise categories and are now discounting items to clear excess inventory, the strategists said.

“Declining consumer spending does represent a threat to earnings for Consumer Discretionary stocks and the Autos industry group in particular,” they said. “Used car prices have declined 6% since January, a sign that demand for vehicles overall may be faltering. The consensus expectation of 13% industry sales growth in 2023 appears Pollyannaish.”

Goldman still expects the S&P 500 to end the year at 4,300, compared with a median 4,650 among strategist targets compiled by Bloomberg as of mid-June. The gauge closed on Friday at 3,911.74. It’s down about 18% so far this year, struggling with factors such as Federal Reserve rate hikes and stubbornly high inflation.

Some investors worry that higher living costs, rising bond yields and weak trailing equity returns may lead to household capitulation in the equity market and further pressure stocks, Kostin and his team said.

But data show households’ demand for equities have stayed “surprisingly strong” this year, they said. Also, as most of the ownership is with the richest people who are more insulated from inflation, and corporates tend to buy when households sell, the firm isn’t as worried about those as factors that would drive down equities.

“The S&P 500 rose by 8% on average during the years in since 1950 in which households sold stocks most aggressively,” the strategists wrote.