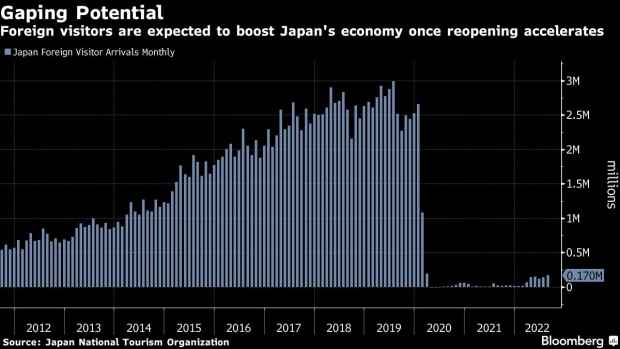 (Bloomberg) -- Goldman Sachs economists say spending by foreign travelers may rise by almost a third from pre-pandemic levels as travel restrictions are eased in a boost for Japan’s economy thanks partly to the slide in the yen.

A “ball-park estimation” shows the possibility of inbound spending rising by 32% to 6.6 trillion yen ($46.4 billion) annually after a full reopening of the economy compared with 2019, according to Yuriko Tanaka and Naohiko Baba in a report.

Prime Minister Fumio Kishida, speaking Thursday in New York after Japan intervened in currency markets to prop up the yen, said he will abolish a range of Covid border controls from Oct. 11 including visa waivers and a cap on daily arrivals. The country had almost 32 million visitors in 2019, before virus restrictions limited movement into the country to a trickle.

The premier has increasingly stressed the need to take advantage of a weak yen as it hovers near 24-year lows against the dollar. The dropping of the restrictions will offer support for the country’s flagging tourism industry and regional economies, though it remains far from clear how quickly foreign tourists will return to Japan.

The Goldman economists base their larger inbound spending projections on an increase in purchasing power for overseas visitors using a cheaper yen and gains in gross domestic product per capita in China. Tourists from China were the largest spending visitors in Japan before the pandemic.

“We think it is important to keep in mind that Japan could potentially benefit over the medium term from significant levels of pent-up inbound visitor demand,” the analysts said.

Still, the Goldman report also cited reasons for caution. Foreign visitors are likely to return only gradually. In particular tourists from China might take longer to return due to restrictions in their own country that are unlikely to be eased “meaningfully” before at least the second quarter of 2023.