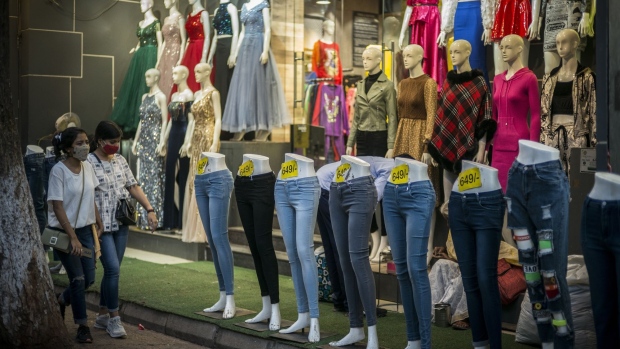 Jeans are displayed on mannequins outside a store during the Diwali festival in New Delhi, India, on Wednesday, Nov. 3, 2021. Businesses are expecting sales during Diwali -- the Hindu festival of lights -- will pick up to levels seen before the pandemic struck early last year, in part because financiers, sitting on a huge pile of excess cash, are eager to lend with outstanding consumer durable loans already at its highest in more than three years. Photographer: Anindito Mukherjee/Bloomberg , Bloomberg

“We do not expect inflationary pressures to accelerate so sharply that they drive large rate hikes,” wrote analysts including Andrew Tilton in a note published Wednesday. The investment bank expects consumer price indexes to rise above consensus estimates in 2022, with higher food prices also driving this jump.

Concerns about inflation have mounted amid high energy prices and supply chain disruptions, which have led to price rises in Asia’s key economies surpassing estimates in recent months. Companies from Japan to India have increasingly sought to pass on to consumers so-called input price pressures, which refers to the purchasing prices of the main raw materials used in production.

Still, Asian policymakers will face less pressure to act, with the region being spared the eye-watering spikes seen in other emerging and developed economies, mainly due to more stable exchange rates and less supply-side damage, according to the Goldman analysts.

The emergence of the new omicron coronavirus variant could pose new inflationary threats, wrote Bloomberg economists Chang Shu and Eric Zhu in a note Wednesday. Potential lockdowns overseas and disruptions to trade due to the virus’s spread would exacerbate already-intense supply constraints and stoke price pressures in countries like China, they wrote.