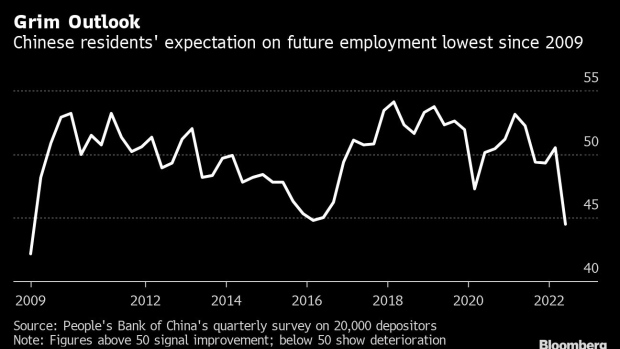 (Bloomberg) -- China’s household spending may rebound in the second half of 2022, increasing 4.5% from a year earlier as Covid restrictions ease and the economy begins to recover, according to Goldman Sachs Group Inc. economists.

That expansion would follow a gloomy second quarter, with Goldman forecasting spending in the April-to-June period likely contracted 1.5%, largely because of slower growth in family cash flows, a battered services sector and dampened sentiment, as reflected by a rising desire for precautionary saving.

The economists, led by Maggie Wei, also estimate that annual household consumption will climb 1% from the prior year after adjusting for inflation -- a figure that would be about 8 percentage points below the trend level. If China gradually retires its Covid Zero strategy in 2023, they said, spending could see double-digit year-on-year growth next year.

China’s economy showed signs of improvement in June as services and construction activity bounced back while Covid curbs were eased. Even so, the highly transmissible omicron variant remains a threat to the economy. President Xi Jinping last week reaffirmed his commitment to Covid Zero, saying the country would rather endure a temporary impact on the economy than let the virus hurt people’s safety and health.

While outbreaks in Shanghai and Beijing seem to have been brought under control, the country is once again facing a test as hundreds of cases were detected over the weekend in eastern Anhui province.

The virus flareups have hit business operations and caused sporadic starts and stops, which in turn have weighed on worker income and the outlook for job stability. The Goldman analysts said that despite the recent economic recovery, the average hours for urban workers per week have been lower, showing the labor market is still weak. Wage growth might stay sluggish in the near term, they added.

“We have not seen signs of pent-up demand in consumption pattern in previous episodes of local Covid outbreaks,” they wrote. “The households’ savings rate tended to drift back to trend level, rather than falling below trend level even after Covid was brought under control and restrictions were eased.”

Household debt stood at around 137% of disposable income as of 2021, the analysts said, adding that residents reduced their leverage in the first quarter. Meanwhile, net financial assets “remained healthy” thanks to the accumulation of deposits. They estimated the amount to be 220% of disposable income, higher than the pre-Covid level of 185% in the fourth quarter of 2019.

The second quarter was tough on sentiment. A recent central bank survey showed the confidence that Chinese depositors have in their future income tumbled to the worst level since the first quarter of 2020, when the pandemic first broke out. About 58% of respondents said they were more willing to increase savings, up almost four percentage points from the first three months of the year.

The sluggish property market has also undermined consumer confidence to spend. Weak property completions cut overall household consumption by around 0.2 percentage point in the second quarter, partly due to less spending related to moving in, the Goldman analysts said.

The drag could become smaller should housing completions turn less negative year-on-year, they added, though the help to overall consumption could be less than 0.1 percentage point.