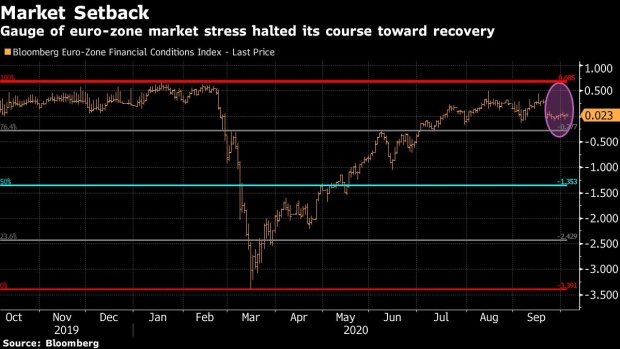 The ECB is also likely to extend the emergency asset-purchase operation, known as PEPP, by six months through the end of 2021, analysts at the U.S. bank wrote in a note to investors Monday. Reinvestments of maturing assets under the plan should continue to the end of 2023, they wrote, adding that the central bank may also target high-yield bonds for purchase.

“A PEPP expansion is likely to be more powerful in supporting the recovery of the euro-area economy -- particularly in southern Europe, where it is most needed -- than a rate cut or an expansion of the regular asset-purchase program,” Goldman analysts including Soeren Radde wrote. That’s because PEPP “would be more powerful in compressing credit spreads.”

Speculation of further monetary easing has grown for a host of reasons -- from the recent uptick in coronavirus infection rates in Spain and France to a decline in euro-area core inflation to a record-low 0.2% in September. The latter prompted ECB officials to comment that they were uncomfortable with almost nil price growth.

Goldman previously expected the PEPP -- with a current limit of 1.35 trillion euros -- to end in mid-2021 and for the ECB to provide additional support through its regular asset-purchase program launched in 2015.

After the Governing Council’s last policy update on Sept. 10, analysts at the U.S. bank said they expected the pandemic operations would only be expanded “in the event of more severe virus disruptions and a smaller-than-expected fiscal expansion in the autumn budgets.”

Credit spreads are a key financial condition that investors watch to monitor market stress along with stock and bond gauges and, as a group, they haven’t yet returned to pre-pandemic levels. A Bloomberg index that measures euro-zone financial conditions has so far retraced only about 83% of the Covid-fueled market plunge that began in the first quarter.

Other tools the ECB might consider include changing terms on its long-term lending to banks and boosting the “tiering multiplier” for banks’ excess reserves, which would soften the strain from negative interest rates by exempting a greater share of banks’ deposits.