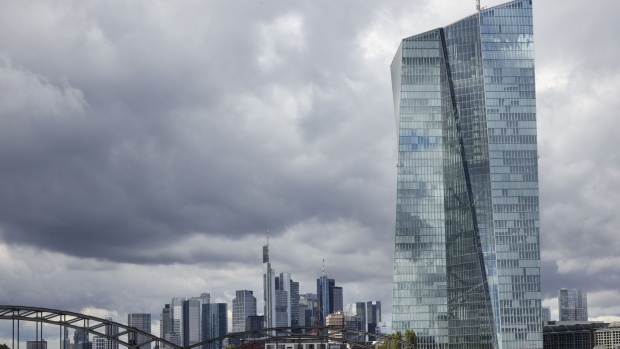 The European Central Bank (ECB) headquarters in Frankfurt, Germany, on Thursday, Sept. 8, 2022. The ECB is on the brink of a jumbo three-quarter-point increase in interest rates to wrest back control over record inflation, even as the risk of a euro-zone recession rises. , Bloomberg

The European Central Bank will probably hike interest rates by 75 basis points at its October and December meetings, according to Goldman Sachs Group Inc.

Economists led by Jari Stehn had previously seen a more moderate increase of 50 basis points at the ECB’s final meeting of the year, but “we believe rising inflation in the fourth quarter will make it difficult to step down the pace of hiking,” they said in a note.

After that Goldman predicts a 50 basis-point move in February -- double the prior forecast -- “as policy turns more restrictive, the inflation numbers stabilize and it becomes clear that the euro area is in recession,” the economists said. “Our updated forecast thus raises the terminal rate to 2.75%, taking policy more into clearly restrictive territory.”

The ECB has already raised borrowing costs by 125 basis points at its last two meetings -- this month by a historic 75 basis points. The question is how to proceed as the ramp-up in prices is accompanied by ever-increasing predictions of a recession. Money-market investors see the ECB delivering another three-quarter-point rate hike in October, with the deposit rate -- currently 0.75% -- rising beyond 2% by year-end.