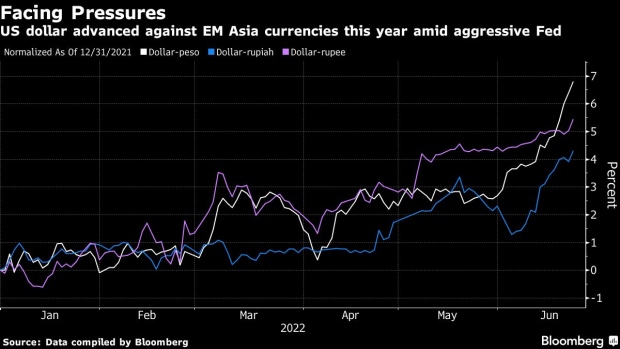 “Along with the broader emerging market currency complex, high-yielding currencies like the Philippine peso, Indian rupee and Indonesian rupiah have been under pressure in June,” strategists including Zach Pandl and Danny Suwanapruti wrote in a research note. “In coming weeks, we expect this pressure to continue versus the dollar, in some cases potentially posing upside risks to our dollar-cross forecasts.”

Emerging-Asia currencies are facing the heat as the Fed’s campaign to curb inflation boosts the dollar while central banks in much of Asia adopt a more patient stance. India’s rupee declined to an all-time low last week, while the Philippine peso slumped to its weakest level in more than 16 years.

Here are Goldman’s views on the rupiah, rupee and peso, which are seen as the most vulnerable to higher oil prices and Fed tightening:

While the rupiah has outperformed most of its emerging market peers, supported by an improved current account outlook and terms of trade developments, it has come under pressure from Fed re-pricing and broader risk-off sentiment, according to Goldman. The dollar-rupiah pair could continue to see upside pressure until Bank Indonesia follows the Fed in hiking interest rates.

Peso has declined about 5% this month in EM Asia’s worst performance. The nation’s current-account deficit is likely to widen to 3.2% this year from 1.7% last year with reopening efforts and an infrastructure spending plan under the new administration. These factors underpin the bank’s bearish view on the currency.

The rupee, which tested a series of record lows in recent weeks, may continue to remain under pressure against the dollar amid expectations of a $40 billion balance of payments deficit this year, compared with a surplus of $55 billion in 2021. The rupee typically depreciates when faced with balance of payments deficits, and therefore Goldman expects that upward pressure on dollar-rupee may persist in coming months.