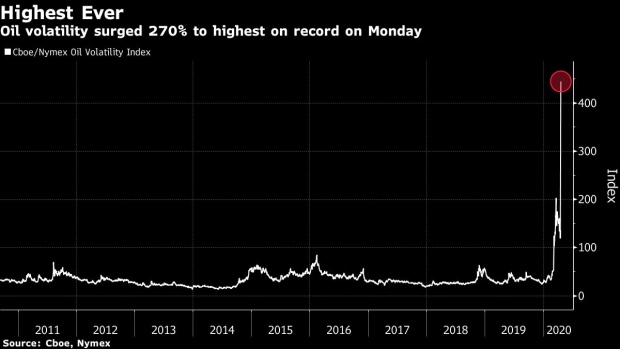 (Bloomberg) -- The oil market is set to be forced into a “violent rebalancing” over the coming weeks as rapidly filling storage leads to significant production cuts and higher prices, according to Goldman Sachs Group Inc.

Price volatility will remain exceptionally high in the coming weeks, Goldman said in a note after oil in New York plunged below zero for the first time in history before the May contract expires Tuesday. While the fall in June futures on Monday wasn’t as dramatic, the contract is likely to see downward pressure as storage fills and spooked retail investors exit, the bank said.

“With ultimately a finite amount of storage left to fill, production will soon need to fall sizeably to bring the market into balance, finally setting the stage for higher prices” once demand recovers, analysts including Damien Courvalin wrote in the note date April 20. “This inflection will play out in a matter of weeks, not months, with the market likely forced to balance before June.”

West Texas Intermediate for May sunk to as low as minus $40.32 a barrel on Monday. Negative prices indicate that holders of those contracts were willing to pay someone to get them out of their long positions before expiry to avoid taking delivery of crude next month, Goldman said. The storage hub at Cushing is likely to be full by the first week of May, the bank added.

While the price move is symptomatic of an unprecedented surplus testing storage capacity, such a dramatic one-day collapse owes entirely to the binding constraints of trading commodity futures into expiration, the bank said.