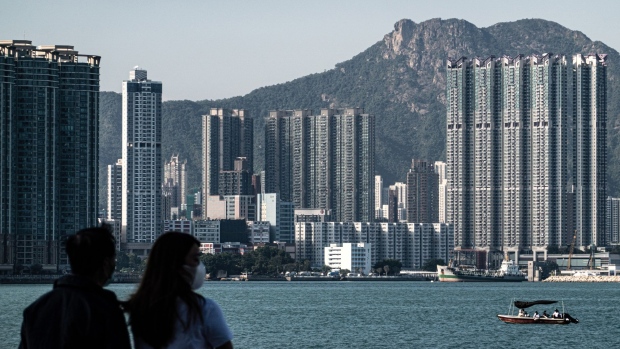 Lion Rock, rear right, overlooks residential buildings by the Victoria harborfront in the Kowloon area in Hong Kong, China, on Tuesday, Oct. 26, 2021. With limited space to build, Hong Kong has gained a reputation for having some of the smallest and most expensive apartments anywhere in the world. , Bloomberg

Residential prices are expected to fall by 15% this year and another 15% in the next, compared with end-2021 levels, analysts including Gurpreet Singh Sahi wrote in a note dated Tuesday. The US investment bank previously expected prices to fall 20% by 2025.

The new forecast is due to a faster-than-expected increase in Hong Kong’s interbank rates, known as Hibor, the analysts said. Three-month Hibor has surged this year to the highest since 2008, as monetary policy in the financial hub is tied to moves by the US Federal Reserve, which is set to hike rates again next month. More than 90% of Hong Kong’s mortgages are tied to Hibor.

The world’s least affordable housing market is in a rare downturn on rising rates, an exodus of residents and a slowing economy. Residential prices have already dropped 8% this year, Goldman said. Surging borrowing costs may push home affordability to the lowest in 24 years unless prices decline significantly, according to Bloomberg Intelligence.

Higher rates “would continue to pressure affordability, keep investors away from the market unless macro or policy becomes more supportive,” the Goldman analysts said. A typical homebuyer could restore their ability to pay if prices fall about 20%, but investors won’t return until they drop at least 35%, the analysts said.