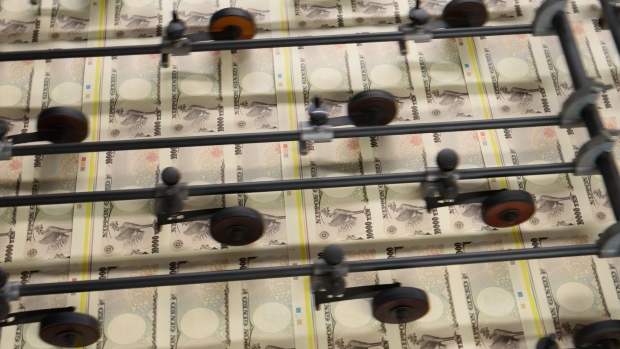 Sheets of Japanese 10,000 yen banknotes move through a machine at the National Printing Bureau Tokyo plant in Tokyo, Japan, on Monday, May 20, 2019. Japan’s unexpected growth spurt on the gross domestic product (GDP) in the first quarter masked weakness in the economy just as policy makers prepare to hike the sales tax in October. Photographer: Akio Kon/Bloomberg , Bloomberg

(Bloomberg) -- The yen’s descent to a two-decade low fueled talks about the Bank of Japan coming to the rescue. But for Goldman Sachs Group Inc., even an intervention wouldn’t change the fortunes of the battered currency.

As long as U.S. yields keep rising and the Japanese monetary authority sticks to its main yield curve control settings, the yen will remain under pressure as rate differentials play in the dollar’s favor, according to the bank.

“We find it hard to see intervention driving a sustained appreciation without any shift in yield curve control expectations,” the firm’s New York-based strategist Karen Reichgott Fishman wrote in a note. “With risks to yields still skewed to the upside, FX intervention seems likely to be less effective.”

The yen extended its decline to a 20-year low, breaching the highly-anticipated 130 mark against the dollar, as the BOJ pledged to buy an unlimited amount of bonds every day to cap yields while also delivering a strong message on its super easy stance. The slump led Japan’s finance ministry to step up, vowing to respond “appropriately” to the abrupt plunge in the currency.

For Fishman, if the yen keeps depreciating there’s a “high risk of intervention,” based on past behavior of the central bank. The bulk of the BOJ interventions occurred when the yen was trading in the 127 to 130 per dollar range.

If the monetary authority reviews the yield curve control settings and Japan’s rate differential to the U.S. narrows by 40 to 45 basis points, the yen could strengthen as much as 3%, according to Goldman. However, the bank doesn’t expect an immediate convergence of rates to the fair value, meaning the impulse to the currency would likely be smaller.