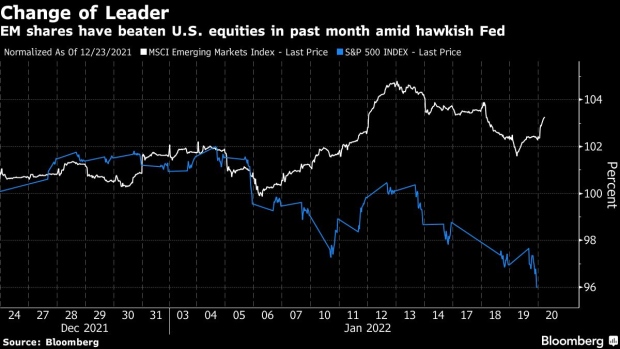 Travelers walk through the departure hall of the Hongqiao Railway Station ahead of Lunar New Year in Shanghai, China, on Sunday, Jan. 23, 2022. The Covid-19 outbreaks in multiple Chinese cities are pressuring travel demand ahead of the Lunar New Year holiday. Photographer: Qilai Shen/Bloomberg , Bloomberg

(Bloomberg) -- Some of the world’s biggest funds are switching toward emerging-market equities in a bet their central banks have less need to raise interest rates after tightening before their developed-nation peers last year.

Goldman Sachs Asset Management and BNP Paribas Asset Management are among those buying the shares on expectations the most attractive valuations in more than a decade will help halt four years of underperformance versus their U.S. counterparts.

The pivot is already paying off. The MSCI Emerging-Market Index has gained 3.6% over the past month despite the threat of Federal Reserve rate hikes and the global spread of omicron. The S&P 500 Index, meanwhile, has tumbled by the same amount.

“We moved to an overweight in EM equities in November,” said Daniel Morris, chief market strategist at BNP Paribas Asset in London. “The Fed may hike rates this year by even more than markets currently expect. In contrast, several emerging-market central banks have already tightened policy and so may even be able to turn supportive in the near future.”

Emerging-market shares may be due to play catch up. After rallying along with their developing-nation peers in the recovery from the pandemic shock in 2020, they fell behind last year due to the emergence of the delta and omicron virus waves and a slow pace of vaccinations. They also faced a headwind from policy tightening as central banks in no less than 12 of the 20 biggest emerging nations raised borrowing costs to help contain inflation.

A pivot toward more growth-friendly policies in China, including interest-rate cuts, and progress toward reopening global travel and tourism also look to be supportive of emerging-market assets.

Record-low interest rates over the past decade have helped propel corporate growth and the equity rally in the U.S. but with Fed rates now set to rise it may be time to diversify, according to Goldman Sachs Asset Management.

“EM economies may be poised for stronger growth in 2022, particularly those at earlier stages of reopening,” Goldman analysts wrote in a research report this month outlining key investment themes for the year. The growth gap with developed economies, which will just start to withdraw monetary and fiscal stimulus this year, will likely widen after their narrowest point in at least 20 years, they said.

Valuations are also favoring emerging-market equities. Even after its recent outperformance, earnings-based valuations on the MSCI Emerging Markets Index are at a 40% discount to those on the S&P 500 Index, close to the largest since 2007, according to data compiled by Bloomberg.

Similarly, the MSCI EM gauge is trading at around 12.4 times its 12-month forward earnings estimate, while a similar gauge for the U.S. equity benchmark is far more expensive at around 20 times.

While money managers are generally favorable about emerging markets as a whole, there’s some disagreement over the outlook for the largest one of them all: China.

BNP Paribas Asset is wary due to regulatory risks as the authorities crack down on sectors as diverse as technology, education, property and gaming.

“We see an opportunity in China equities, the question is how big,” Morris said. “We appreciate their significant risks, since I don’t know how long this regulatory crackdown might continue and what format it might take. There is still a lack of clarity about what exactly ‘common prosperity’ is going to turn out.”

Pictet Asset Management, in contrast, is favorable on the Asian nation.

“China in particular considerably lagged other EM markets and we would expect there to be a pick-up in investor interest here,” said Kiran Nandra, head of emerging-market equities at the money manager in London. “We are already seeing initial signs of a more dovish monetary policy in light of the reserve-requirement-ratio cut and overnight rate cuts. However, it will be important to pick the right areas to focus on.”

Here are some of the major events and data to watch in emerging markets this week: