Goldman Sachs Group Inc. slashed its year-end target for the S&P 500 Index to 3,600 from 4,300, arguing that a dramatic shift in the outlook for interest rates moving higher will weigh on valuations for US equities.

The higher interest-rate scenario in Goldman’s valuation model supports a price-earnings multiple of 15 times, compared with 18 times previously, strategists including David J. Kostin wrote in a note on Thursday. “Our economists now forecast the FOMC will raise the policy rate by 75 basis points in November, 50 basis point in December, and 25 basis points in February for a peak funds rate of 4.5 per cent-4.75 per cent.”

Goldman said the risks to its latest forecast are still skewed to the downside because of the rising odds of recession -- a scenario that would reduce corporate earnings, widen the yield gap and push the US equity benchmark to a trough of 3,150. Federal Reserve Chair Jerome Powell has signaled that he would risk a recession to fight inflation, spurring fears that central banks may derail global growth.

Equity valuations and real yields have moved in lockstep for the past few years but that relationship has recently dislocated, posing a risk to equities, the US investment bank said. It had previously assumed real rates would end 2022 at roughly 0.5 per cent, compared with an assumption of 1.5 per cent now. 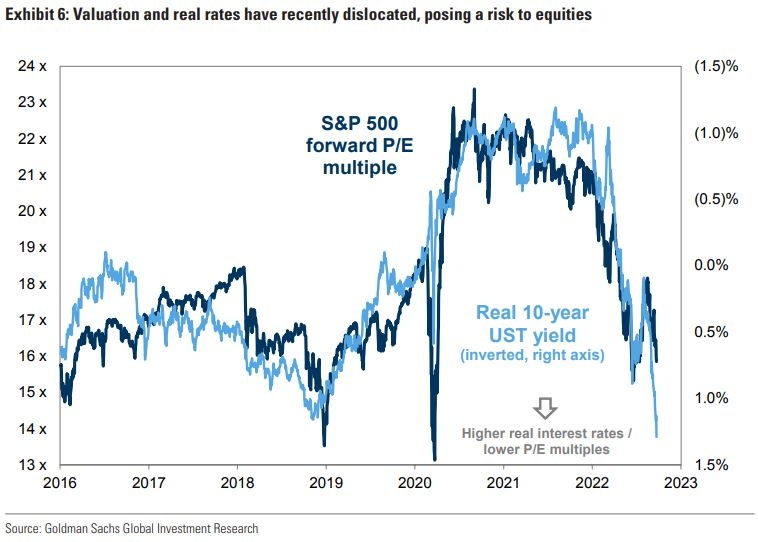 Goldman is cutting its target as several strategists surveyed by Bloomberg have reduced their year-end estimates for the S&P 500, even as they still on average see 16 per cent upside from current levels through the end of this year. Analysts have also slashed price targets for US stocks but still predict nearly 26 per cent returns for the benchmark over the next 12 months. Earnings estimates for the S&P 500 have risen 6 per cent this year but have seen some cuts since June.

A majority of equity investors have adopted the view that a hard landing scenario is inevitable and their focus is on the timing, magnitude, and duration of a potential recession, Kostin and his colleagues wrote. Under such a framework, the 3-, 6-, and 12-month S&P 500 targets work out to 3,400, 3,150, and 3,750 respectively, they said.

To be sure, the S&P 500 has underperformed the Stoxx Europe 600 Index since Sept. 12, when Kostin and his team said they saw the US as a safer bet than Europe. They also say a year-end rally in the US equity gauge to 4,300 is possible if inflation shows clear signs of easing.

Goldman’s new base-case target implies a 4.2 per cent drop in the US equity benchmark from Thursday’s close. It forecasts 6-month and 12-month targets for the gauge at 3,600 and 4,000, respectively.

The US bank like many of its peers advises that elevated uncertainty calls for defensive positioning from investors and they should own stocks with quality attributes such as strong balance sheets, high returns on capital, and stable sales growth.