Utilities and telecom stocks are likely to remain under pressure: Patrick Horan

Stock markets are in for a wild ride next year as they don't yet reflect the risk of a U.S. recession, according to strategists at Goldman Sachs Group Inc. and Deutsche Bank.

The team including Christian Mueller-Glissmann and Cecilia Mariotti said their model implies a 39 per cent probability of a U.S. growth slowdown in the next 12 months, but risk assets are only pricing in an 11 per cent chance. “This increases the risk of further recession scares next year,” they wrote in a note on Monday.

Deutsche Bank's Binky Chadha, meanwhile, expects the S&P 500 Index to slump to 3,250 points -- 19 per cent below current levels -- in the third quarter as a recession begins, before rebounding in the fourth quarter.

Their calls are a warning after equities rallied sharply in the past two months on bets that a peak in inflation will lead to a softening of hawkish central bank policies. The Goldman strategists said that while monetary policy should become less of a headwind next year, slowing global growth will keep stocks under pressure. 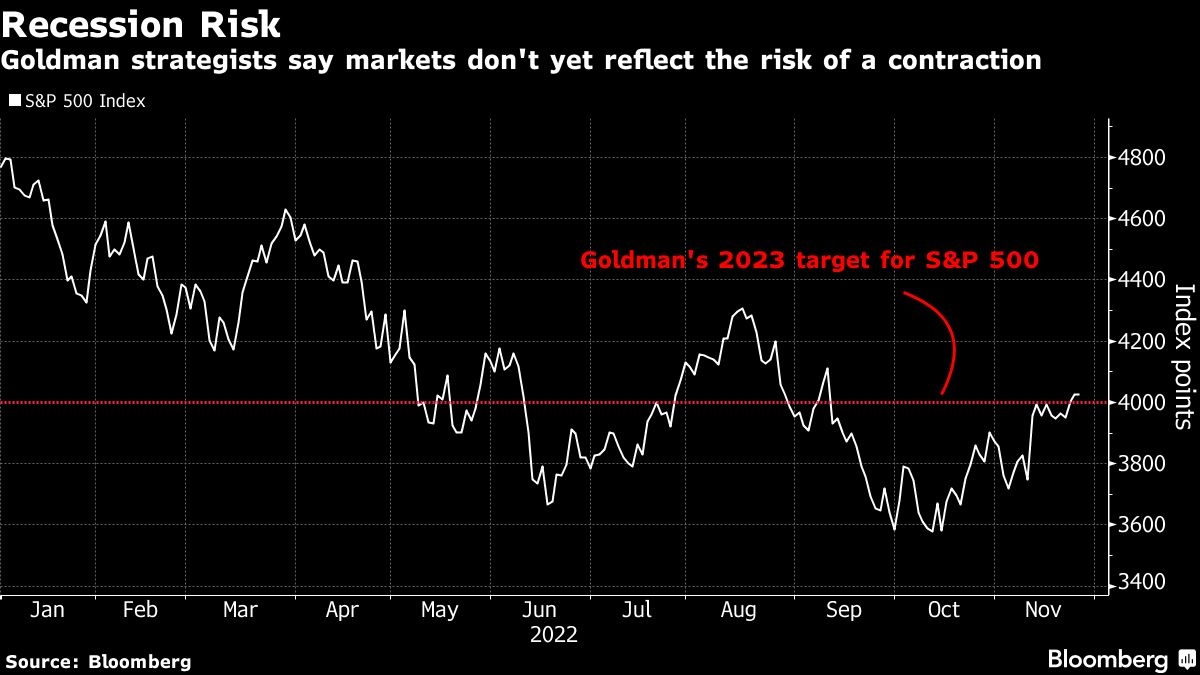 Goldman's analysis shows that equities tend to rebound once inflation has peaked if a recession is avoided. In the event of a contraction, however, they decline another 10 per cent on average in the six to nine months after the peak. While they see US recession risk as relatively low, they noted that concerns over financial stability as well as market stress indicators -- such as liquidity risk and solvency risk -- has increased across asset classes.

Overall, they prefer bonds over stocks, saying they offer better risk/reward and should be less positively correlated with stocks later in 2023.

The Goldman strategists estimated last week that the S&P 500 will end 2023 at 4,000 index points -- nearly unchanged from Friday's close. They expect higher volatility going into next year followed by a recovery in the second half, they said on Monday. Deutsche Bank's team also predict a rebound for the index in the fourth quarter, ending the year at 4,500 points.

Among Goldman's other calls, the strategists said: