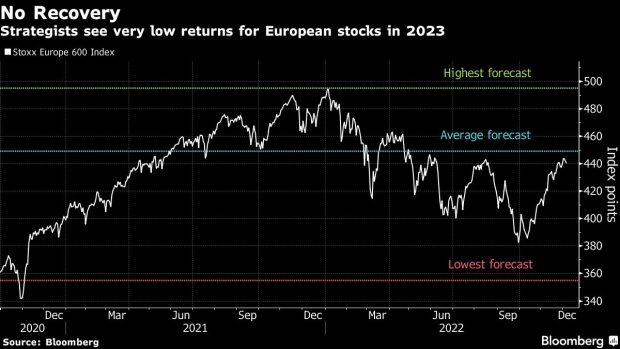 (Bloomberg) -- The rapid rebound from what’s set to be the worst year for European stocks since 2018 will likely come to a halt next year, according to strategists.

The Stoxx Europe 600 Index will end 2023 at 449 points, according to a Bloomberg survey of 14 strategists, including Goldman Sachs Group Inc. and Bank of America Corp., indicating gains of less than 2% versus Monday close.

The poll shows that strategists aren’t convinced about the longevity of a rally that has put the benchmark on track for its best quarter since 2015, with a gain of 13% being fueled by optimism of lower interest-rate hikes and China’s reopening. Those at Bank of America and Goldman both expect the region’s equities to fall in the first half before recovering in the second. That follows this year’s 10% decline, which was spurred by stubbornly-high inflation, an energy crisis and ongoing monetary tightening.

More recently, several benchmarks including the euro-area Stoxx 50, Germany’s DAX and Italy’s FTSE MIB have entered bull markets. The Stoxx 600 isn’t quite there yet, but adjusted for dividends, it’s back above where it was prior to the start of the war in Ukraine.

For Bank of America strategist Milla Savova, central banks’ aggressive monetary policy will lead to a weakening of global growth momentum in the first half of next year, though the impact on equities will be partly offset by a decline in real bond yields. She sees more than 15% downside for the Stoxx 600 by the end of the second quarter, before a rebound from 365 points to 430 points by year-end as economies start to recover.

Goldman Sachs strategists share a similar view. “We expect 2023 to prove tougher after the resilience in earnings this year,” said strategist Sharon Bell, citing margin pressure due to higher costs that will be harder to pass on in a recession.

The range of forecasts for the Stoxx 600 is relatively wide. Deutsche Bank AG strategists are the most optimistic at 495, representing a 12% increase from current levels, while TFS Derivatives is the most bearish at 355, implying nearly 20% downside.

Deutsche Bank has an overweight on the old continent for 2023, citing a heavy valuation discount to US peers, a peaking dollar and very low positioning on the region’s stocks.

The Stoxx 600 trades near a record 30% discount to the S&P 500 in terms of forward price-to-earnings multiples, due to the plethora of European value and cyclical shares such as banks, energy and autos that still trade at depressed valuations.

For BNP Paribas SA’s Ankit Gheedia, such low valuations aren’t enough to justify the recent rally. Adjusted for higher rates and the 10% earnings downgrade he expects next year, stocks still look expensive, according to Gheedia, who forecasts a 19% drop in the euro-area benchmark Euro Stoxx 50 in 2023.

TFS’s Stephane Ekolo, who correctly predicted the market drop earlier this year, is on a similar page. Slowing economic growth, falling earnings estimates, and geopolitical and trade tensions are likely to be detrimental for stocks, he said.

According to Bloomberg’s survey, it won’t be any better for the region’s other major indexes, with the UK’s FTSE 100 seen mostly flat, while the German DAX is expected to rise only 2.2%.