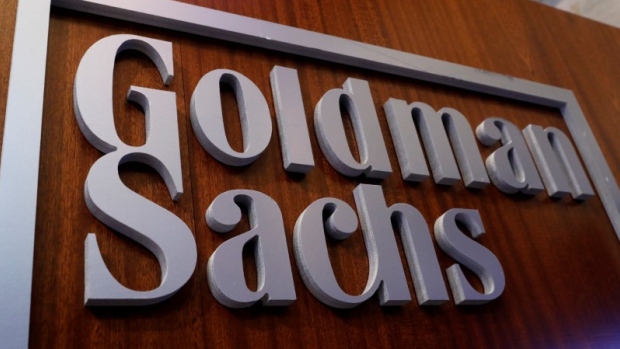 A Goldman Sachs sign is displayed inside the company's post on the floor of the New York Stock Exchange (NYSE) in New York, U.S., April 18, 2017. , Reuters

At least one of Wall Street’s biggest firms is growing more comfortable with cryptocurrencies.

Goldman Sachs Group Inc. is setting up a trading desk to make markets in digital currencies such as bitcoin, according to people with knowledge of the strategy. The bank aims to get the business running by the end of June, if not earlier, two of the people said. Another said it’s still trying to work out security issues as well as how it would hold, or custody, the assets.

The move positions Goldman Sachs to become the first large Wall Street firm to make markets in cryptocurrencies, whose wild price swings and surging values have captured the public’s imagination but given pause to established institutions. Already, the bank is among just a few mainstream firms clearing a new breed of bitcoin futures offered by Cboe Global Markets Inc. and CME Group Inc. Citigroup Inc. and Bank of America Corp., for example, have been taking a wait-and-see approach.

Goldman Sachs is now assembling a team in New York, one of the people said. While the bank hasn’t made a decision where to house the desk, one possibility is that it will operate within the fixed-income, currencies and commodities unit’s systematic trading function, which conducts transactions electronically, two people said. Darren Cohen, in the firm’s principal strategic investments group, is also looking at opportunities, another person said.

“In response to client interest in digital currencies, we are exploring how best to serve them,” Michael DuVally, a spokesman, said in a statement.

Publicly, Chief Executive Officer Lloyd Blankfein has been circumspect. He tweeted in October that his firm was looking at how to deal with bitcoin. In a Bloomberg Television interview last month, he said his bank didn’t need a bitcoin strategy yet because the digital currency is still just developing and volatile.

And when the bank began clearing futures earlier this month, it demanded that some clients set aside funds equal to the full value of their trade, people familiar with the policy said at the time. The conservatism deterred some customers and led them to take their business elsewhere.