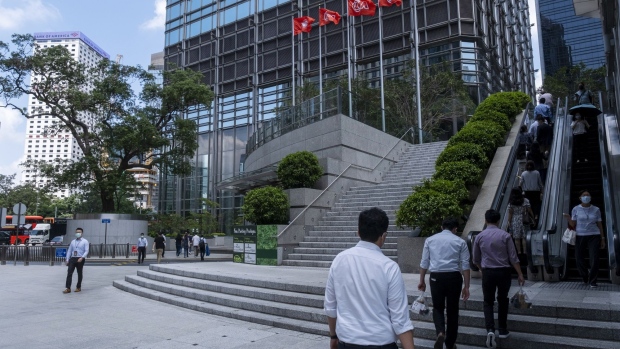 People walk towards an escalator in front of the Cheung Kong Center, which houses the Goldman Sachs Group Inc. offices, during lunch hour in the Central district of Hong Kong, China, on Monday, June, 7, 2021. Goldman Sachs Group Inc. and HSBC are opening their offices fully in Hong Kong as a fourth wave of infections was contained and the U.S. investment bank said half of its staff in the financial hub are now vaccinated. , Bloomberg

(Bloomberg) -- Goldman Sachs Group Inc. is rolling out a reimbursement plan to help compensate its employees in the Asia-Pacific for costs incurred from hotel quarantine stays as Hong Kong’s strict Covid-Zero strategy makes it harder for global banks to retain top talent in the region.

Goldman staff in the region will be able to claim a one-time subsidy of up to $5,000 to cover costs from a mandatory quarantine stay effective Dec. 1, according to a memo seen by Bloomberg. A Hong Kong-based spokeswoman confirmed the content of the memo. The subsidy is in recognition that staff in the Asia-Pacific region have faced “the additional burden of multiple lockdowns and some of the strictest quarantine measures in the world,” the memo said.

“We hope that this subsidy will make it easier for you to reconnect with families and friends living overseas, or even just to enjoy a change of scenery and recharge during a holiday abroad,” the memo said.

Goldman is the third global bank to introduce a reimbursement program to staff impacted by Hong Kong’s quarantine rules, following its arch-rival Morgan Stanley and JPMorgan Chase & Co. Lenders in the city are struggling to retain and attract talent in the city as financial hub sticks to one of the of the world’s most stringent Covid policies, placing incoming travelers in quarantine for as long as three weeks.

JPMorgan offered to reimburse its Hong Kong-based employees after a brief visit by its Chief Executive Officer Jamie Dimon, who received a quarantine exemption. During a 30-hour visit, Dimon told reporters that the restrictions were making it harder for the banking industry to keep its people.

The finance industry has been ratcheting up pressure on Hong Kong to ease its quarantine rules and abandon its Covid-Zero policy, following a survey that found almost half of major international banks and asset managers are contemplating moving staff or functions out of the city.

Still, Hong Kong has been successful in keeping cases and deaths to a minimum, and life is close to normal within the city. Having to contend with a reluctance among particularly the elderly to get vaccinated, officials have so far rejected pleas to ease up. They have also made opening up travel to the Chinese mainland their biggest priority.