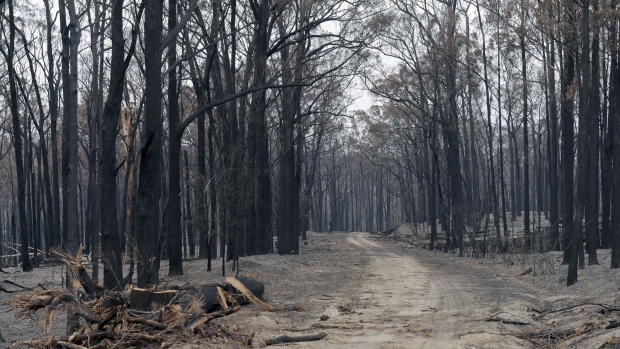 (Bloomberg) -- Some of the world’s biggest investment banks are deploying their financial muscle to help Australia cope with deadly wildfires, joining a growing list of companies and celebrities who have donated tens of millions of dollars to disaster relief.

UBS Group AG’s Australia unit plans to pass on all cash equity commissions the bank made on Australian trades on Feb. 12, according to an internal memo circulated this week and seen by Bloomberg News. The money will be donated to the Australian Red Cross Disaster Relief and Recovery fund.

It joins Goldman Sachs Group Inc. and MUFG Bank Ltd. who have offered donations of A$725,000 ($500,000) and A$40,000 respectively. The nation’s four biggest lenders have also stepped up, with National Australia Bank Ltd. donating A$5 million, Westpac Banking Corp. about A$1.5 million, while Commonwealth Bank of Australia and Australia & New Zealand Banking Group Ltd. have each pledged about A$1 million.

There’s a growing list of philanthropists and celebrities who have pitched in to help with the wildfire crisis that’s left at least 28 people dead, scorched a combined area more than twice the size of Switzerland and killed an estimated 1 billion native animals.

Mining billionaire Andrew Forrest’s Minderoo Foundation has pledged A$70 million, while the Paul Ramsay Foundation has contributed A$30 million. Billionaire James Packer and his casino company Crown Resorts Ltd. have donated a total of A$5 million. Celebrity pledges have come from stars such as Elton John, Chris Hemsworth, Bette Midler and Nicole Kidman.

To contact the reporter on this story: Harry Brumpton in Sydney at hbrumpton@bloomberg.net

To contact the editors responsible for this story: Fion Li at fli59@bloomberg.net, Edward Johnson