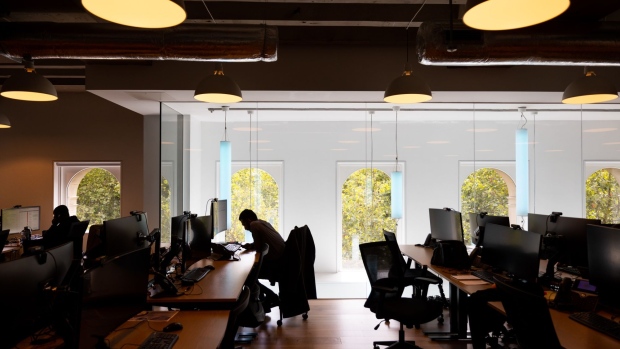 (Bloomberg) -- Morgan Stanley is embarking on a fresh round of job cuts as rival banks sounded caution that a looming US recession will dampen hiring.

Goldman Sachs Group Inc. Chief Executive Officer David Solomon said the bank may have to prune staff in certain areas and exercise caution with its financial resources amid mounting economic uncertainty. As fewer Bank of America Corp. employees decide to leave, the company is slowing hiring in an attempt to manage headcount ahead of a downturn, CEO Brian Moynihan said during an interview with Bloomberg Television Tuesday.

Morgan Stanley will reduce its global workforce by about 1,600, amounting to roughly 2% of the total, according to a person familiar with the matter. The bank had more than 80,000 employees at the end of the third quarter, compared to about 60,000 just before the pandemic began.

The statements underscore the pain sweeping the US with layoffs and hiring freezes extending beyond the technology industry where Facebook parent Meta, Amazon.com Inc. and Apple Inc. have begun shedding jobs or pausing hiring.

“You have to assume that we have some bumpy times ahead,” Solomon said in an interview. “You have to be a little more cautious with your financial resources, with your sizing and footprint of the organization.”

Goldman’s business lines are closely linked to the economy, and the bank has forecast slowing growth ahead. That would mean the New York-based firm will have to make some tough decisions, Solomon said, especially since a soft landing is far from assured. Solomon said the US could see a recession in 2023, even though the bank’s economists say it could still avoid one.

Goldman embarked on its biggest round of jobs cuts since the start of the pandemic in September, with plans to eliminate several hundred roles. The bank said in July that it planned to slow hiring and reinstate annual performance reviews — foreshadowing the job cuts it planned to undertake later in the year. It’s an effort to rein in expenses amid what it called a “challenging operating environment.”

“It shouldn’t be surprising to people — watching the performance of the business this year — that 2021 was an exceptional year,” Solomon said. “2022 is a different year, and so naturally compensation will be lower.”

Wall Street is facing a tricky balancing act to keep a lid on total spending while preventing defections by its top performers.

“We seek talent all the time — we bring them in the company,” Moynihan said. “We’re just more careful about it in times like this.”

Bank of America, based in Charlotte, North Carolina, is also focused on paying and promoting existing employees, he said. “We want to take care of our own first — that’s the principle.”

The company is still hiring relationship managers in business and commercial banking, as well as financial advisers, private bankers and other employees in bank branches, Moynihan said.