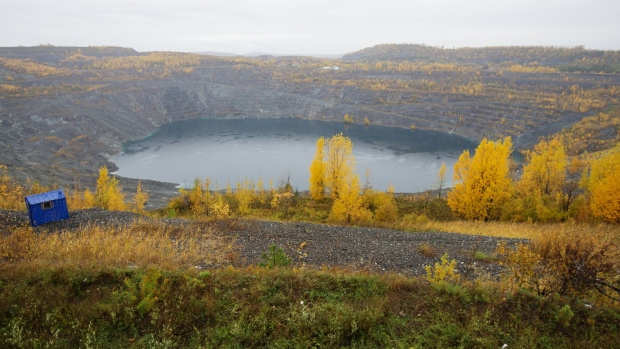 Water fills the open pit of the closed Jeffrey asbestos mine in Asbestos, Quebec. , Bloomberg

The people of Asbestos, Quebec, broke away from the past by choosing a poetic name for their town in a historic vote ending their association with the deadly mineral.

The town of about 7,000 people will be renamed Val-des-Sources, which means “valley of springs” in French, Mayor Hugues Grimard announced Monday. The moniker beat five other options on a preferential ballot.

Described by the town council as “the fusion of our landscape and our roots,” Val-des-Sources refers both literally to its geography -- the town is by a lake -- and metaphorically to water, according to the official description. It is “the symbol of what we have the ambition to become.”

The shift to a new identity is designed to help attract companies that have balked over the years at being linked, however indirectly, to a mineral known for causing cancer. The town council had repeatedly said it made the decision with the young generation’s future in mind.

“With a name like Val-des-Sources, I am convinced that our future will be prosperous and happy,” Grimard said.

Grimard said he was proud of the unique process followed by the town, from the consultation to the vote. Residents as young as 14 were allowed to take part; most people cast ballots from their cars to reduce the risk of Covid-19. The participation rate was 48%.

Still, the path has been rocky. A first attempt to change name was quickly abandoned in 2006. This time, the vote has been delayed by the pandemic, which hit Quebec harder than any other Canadian province. And the council had to go back to the drawing board after its initial shortlist, which included a rare turtle species, was criticized by the population.

Some critics had questioned the need to change the name at all (the French word for asbestos is amiante) and worried about rejecting a key part of their history.

Not that the mine, which supported locals for decades and has been closed for several years, could be forgotten easily: the crater, more than a mile wide, sits in the middle of town and is deep enough to hold an Eiffel tower.