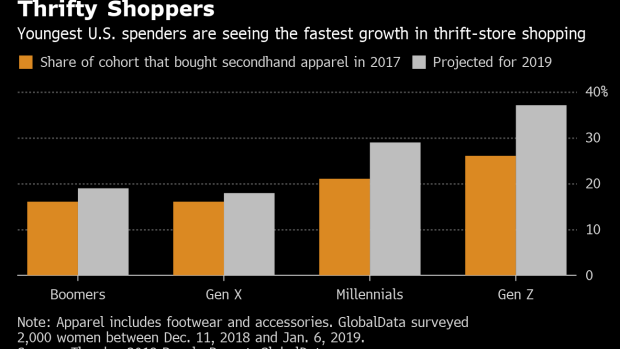 (Bloomberg) -- Goodwill is setting its sights on a formidable rival for a charity thrift store: Amazon.

The nonprofit’s New York-area organization has teamed up with Price.com to develop a browser add-on that alerts online shoppers at sites like Amazon.com Inc. and Walmart Inc.’s Jet.com when a product they’re looking to buy -- say a mountain bike or a pair of shoes -- is available on Goodwill’s website. Shoppers can then click a pop-up link to order the second-hand version shipped to them instead.

“We’re offering the same exact goods that you can find on Amazon, that you can find on Jet, and we’re offering them for a much lower price than those websites do,” said Joe Jarroush, vice president of retail operations for Goodwill in greater New York and Northern New Jersey. “I know when people think about Goodwill they maybe don’t think about these advancements in tech, but that’s where we’re headed.”

The launch of a Chrome browser extension may seem like an unusual move for a thrift-store operator known for its brick-and-mortar presence and low-cost shopping. But as new online thrift stores like Thredup and Poshmark grow and young consumers increasingly flock to used and upcycled apparel, it gives Goodwill a chance to reach today’s digital customers where they shop.

The popularity of second-hand clothing is on the rise and will be bigger than fast fashion within the decade, according to Thredup’s 2019 Resale Report. Millennials and Generation Z shoppers are turning to reused clothing at the quickest pace, the survey found. And Americans appear to be giving away more stuff than usual after the launch of the show “Tidying Up With Marie Kondo” on Netflix.

“It’s all adding up to this thrift buildup,” Jarroush said. “It’s very encouraging that the thrift market is growing substantially.”

For now, the new browser add-on will only be able to search for similar products for sale at Goodwill Industries of Greater New York and Northern New Jersey, whose website currently attracts 6 million visitors a month, according to RJ Jain, chief executive officer of closely held startup Price.com.

Bloomberg’s attempts to get the add-on to flag similar used items was patchy, with only a small selection of products triggering the pop-up. A representative for Price.com said that’s because Goodwill’s New York and New Jersey site has very limited inventory.

Eventually, the nonprofit wants to roll out the tool to include more inventory from other parts of the U.S. Still, Goodwill NYNJ said it doesn’t see the online push cannibalizing its physical stores, where it trains and employs thousands of workers every year, including seniors, veterans and people with disabilities who might otherwise have a hard time finding a job.

“If we had an Oscar de la Renta runway piece and they sent that over to us, then that’s fine. Typically we leave that for the thrifter, the local shopper who’s going to their local Goodwill,” Jarroush said. “We don’t want to rob them of that.”

To contact the reporter on this story: Jordyn Holman in New York at jholman19@bloomberg.net