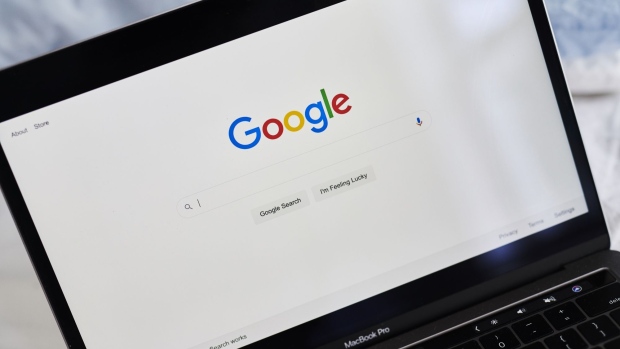 The Alphabet Inc. Google search page is displayed on a laptop computer in an arranged photograph taken in the Brooklyn Borough of New York, U.S., on Friday, July 24, 2020. Alphabet Inc. is scheduled to release earnings figures on July 30. Photographer: Gabby Jones/Bloomberg , Bloomberg

(Bloomberg) -- Google brought an end to a dispute with publishers and avoided further fines after winning regulatory approval for pledges that pave the way for payments for displaying snippets of their news articles on its platforms.

The French competition authority said Google significantly improved commitments it initially offered last year, which now address its concerns and have been made binding, ending the case. The Alphabet Inc. unit made promises last year in the wake of a 500 million euro ($527 million) fine for failing to follow an earlier order to thrash out fair deals with publishers. The company also agreed to withdraw its challenge against the penalty.

“For the first time in Europe, Google’s commitments provide a dynamic framework for negotiating and sharing information to transparently assess” how much publishers are owed, Benoit Coeure, who heads the Autorite de la concurrence, said in a statement on Tuesday. He also highlighted that in case negotiations stumble, the matter would be brought in front of an arbitration court at Google’s cost.

Google struck successive deals in recent months with news service Agence France-Presse, a grouping of French newspapers including Le Monde and Le Figaro and a separate group representing magazine publishers. They filed complaints in France in 2019 saying they weren’t paid a fair price for using news content on its platform.

France’s competition arm has kept a close eye on Silicon Valley firm in recent years. In addition to the news case, Google last year agreed to pay a 220 million-euro penalty to settle a probe into its power over online advertising and it got a 150 million-euro fine in 2019 in a case focusing on its Google Ads platform. The regulator’s record 1.1 billion-euro fine was issued in 2020 against Apple Inc. over anti-competitive agreements with two distributors.