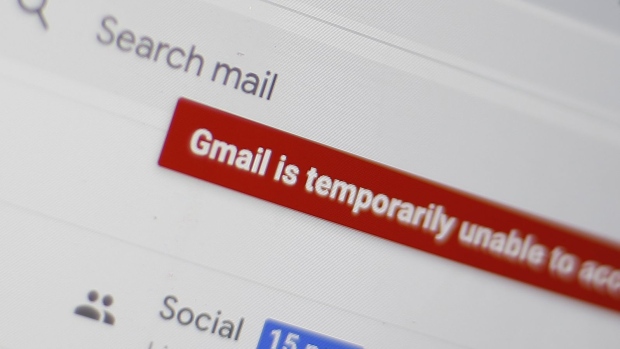 An error message on the Gmail.com homepage in London, England, U.K., on Monday, Dec. 14, 2020. Services from Alphabet Inc. are experiencing widespread outages around the world, preventing people from accessing Gmail, YouTube and other products. Photographer: Hollie Adams/Bloomberg , Bloomberg

Google diagnosed a widespread outage that knocked out major services earlier this week, such as Gmail and YouTube, as a mistake with its system for identifying people online.

Alphabet Inc.’s Google has several tools that enable it to verify and track logged-in users. In October, the company began moving those tools to a new file storage system, and in the process misreported portions of the data, according to a Friday post. That caused several of its services to go down for 47 minutes Monday morning, a rare technical misstep.

About 15% of requests sent to Google’s cloud storage service were disrupted during the Monday outage, the company said. The cloud division offers an identification service similar to one from Okta Inc.

On Tuesday, Google’s Gmail service had another disruption. The company attributed this to an issue with data migration.