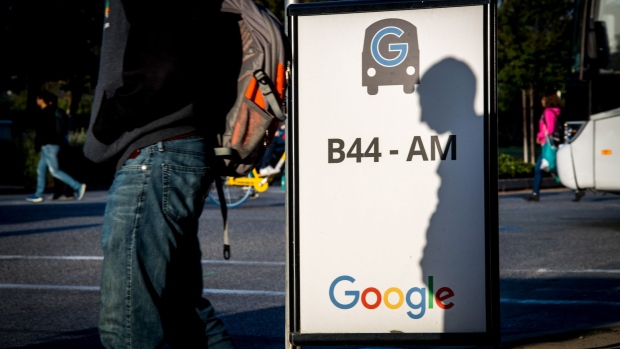 A pedestrian walks past a sign at Google Inc. headquarters in Mountain View, California, U.S., on Wednesday, April 25, 2018. Alphabet Inc. is pushing efforts to roll back the most comprehensive biometric privacy law in the U.S., even as the company and its peers face heightened scrutiny after the unauthorized sharing of data at Facebook Inc. , Bloomberg

(Bloomberg) -- Google’s campus security system subjected Black and Latinx workers to bias and prompted complaints to management, according to people familiar with the situation, leading the company to scrap a key part of the approach.

The internet giant encouraged employees to check colleagues’ ID badges on campus, and asked security staff to do the same. This went beyond the typical corporate office system where workers swipe badges to enter. The policy was designed to prevent unauthorized visitors and keep Google’s open work areas safe.

But some staffers told management that Black and Latinx workers had their badges checked more often than other employees, according to the people, who experienced this themselves or saw friends and colleagues go through it.

As a result, these employees felt policed on campus in a similar way that they are under suspicion elsewhere in life, said the people, who weren’t authorized to speak publicly about the issue. It’s an example of the unconscious, or overlooked, biases that make working in Silicon Valley harder for minorities, the people added.

Some workers complained about the security system to Chief Executive Officer Sundar Pichai, and, in the midst of recent nationwide protests against racism and police brutality, he committed to change. In a June 17 blog post, the CEO pledged donations and more diverse leadership, and said the practice of asking Googlers to check each other’s ID badges would end. The change seems small, but it illuminates how Black and brown employees struggle to fit in at Google, and elsewhere in Silicon Valley. A Google spokeswoman declined to comment.

Read more: For Black CEOs in Tech, Humiliation Is a Part of Doing Business

“We’re working to create a stronger sense of inclusion and belonging for Googlers in general and our Black+ community in particular,” Pichai wrote in the blog, which was also sent as a memo to staff. “We have realized this process is susceptible to bias.”

Alphabet Inc.’s Google has tried to increase the diversity of its workforce. The company was among the first to release an annual diversity report, and it has pledged to hire more minorities, women and LGBTQ employees for years. However, progress has been slow, especially when it comes to hiring and retaining Black people. Just 3.7% of Google’s U.S. workforce is Black and 5.9% is Latinx, according to its most recent diversity report. Other tech giants have also struggled with this.

The recent wave of anti-racism protests and a broader embrace of the Black Lives Matter movement spurred underrepresented workers at Google to push for more and faster change. A Black Leadership Advisory Group met multiple times with Pichai after the police killing of George Floyd. The badge-checking system was one of the top issues highlighted by the group. So the CEO’s decision to scrap the policy was a big deal for Black and Latinx workers, according to the people familiar with the situation.

Pichai said Google had been researching changes to its campus security policy over the past year, but the protests likely prompted faster action. The company had been increasing workplace security since April 2018, when three employees were shot at the Silicon Valley headquarters of its YouTube video unit.

The insistence on checking employee IDs was meant to discourage “tailgaters” -- people who followed others into Google buildings without swiping badges to enter. But in practice, Black and Latinx employees were stopped and told “Let me see your badge,” even after they proved they had the right to enter the office by swiping in, one of the people said.

The resulting impression Black employees got is that they don’t belong, that their education, credentials and gainful employment aren’t enough to avoid suspicion based on the color of their skin, the people said. One staffer described the policy as death by a thousand cuts, which may have contributed to some Black and Latinx employees leaving the company. Retaining diverse workers is a challenge other companies face, too.

Another Google worker noted that Google’s previous policy empowered employees outside of security staff to weigh in on who belonged on campus and who didn’t. Pichai conceded in his memo that the policy may have added to a loss of “psychological safety” among Black workers and other underrepresented employees.

Even with the CEO’s recent changes, some Black employees don’t expect the company to become a haven for Black advancement any time soon. One worker pointed out that the company has committed to hiring and promoting “underrepresented” executives, not specifically Black people.

Another Black employee said they were heartened to see that Pichai’s pledge included a specific target this time -- increase leadership from underrepresented groups by 30% by 2025. There are some big open roles at Google right now, so workers will be watching to see if real change happens, this person said.